This is serious danger that I never thought about until it happened to me.

As most of you know, I have comorbid fibromyalgia. What you might not know is that for the first half of the year I was also fighting pneumonia and its ugly cousin, pleurisy. Because of all these health problems, I have been taking a lot of extra medications. Some have pretty serious side effects.

Like many of you, I have a weekly medicine tray that I refill each weekend. It contains all of my daily preventive medicines divided into morning and evening doses. I also have a PRN medicine tray. Each section contains a one week supply of each of my PRN medicines. I do this so I don’t take too many. Recently it has also contained some Norco. It is very unusual for me to take narcotics. However, failed fibromyalgia medicine and intense chest pain every time I took a breath convinced me I might need it for a short time.

I was starting to feel better and pushed it just a little too hard. So I had a lot of pain but did not want the drowsiness of the stronger medicines. So, I chose to take a single dose of Excedrin twice a day for 2 days until my pain resolved.

No big deal, right? Wrong. That’s where the trouble started.

In dim light Excedrin looks almost the same as Norco. Can you guess what I did? Yep, I took two Norco twice a day for two days.  They are a strong dose at 7.5/325mg per pill.  I couldn’t figure out why I couldn’t stay awake. Some of my medicines have drowsiness as a side effect, but I have long since adjusted to them. This was crazy!

Finally on the morning of the third day, just after I took the last dose, I confessed to my daughter that I didn’t think I could be alert enough to look after my granddaughter.  Fortunately she was able to call in one of her emergency sitters to look after both of us.

That’s when I realized my mistake.  I asked her to find the prescription bottle with the remaining Norco and compare it to what I thought was Excedrin.  Sure enough, I’d been taking the wrong medicine for two days!  Quickly, I asked her to remove all the Norco from my PRN pill box. I hadn’t done the math yet so I didn’t realize I had consumed 2,600 mg of acetaminophen in just over 24 hours. That’s a lot, but still well shy of the 4,000 mg needed to cause liver toxicity. I called my doctor anyway to ask if I needed to be seen. He assured me that I was not in any danger of liver toxicity from the acetaminophen, but to instruct my sitter to call 911 if I became unresponsive.

My head started to clear later that evening, but it took another 48 hours for me to feel fully alert. I got very lucky that the worst thing was a very long nap. I could have been seriously injured if I had continued down that path.  It was a simple case of mistaken identity, but certainly one I will never repeat.

I took this photo of both Excedrin and Norco with the blank sides up.  In the dark, in the middle of an attack, could you tell which is which? 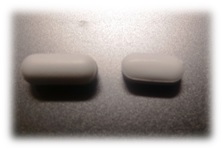 A lot of migraine patients take both of these medications, so please be careful. Keep look-alike medications in separate locations in their original containers. Your health and safety depend on it.

"What Did You Do This Weekend?"

5 comments
This article represents the opinions, thoughts, and experiences of the author; none of this content has been paid for by any advertiser. The Migraine.com team does not recommend or endorse any products or treatments discussed herein. Learn more about how we maintain editorial integrity here.