Depressed: Migraine in a Word

Aside from our shared experience of pain, is there anything more pervasive in the migraine community than depression? Being depressed is a huge part of what we are as migraineurs and was often shared by participants in our Migraine in a Word poll as the one word that best described their experience living with migraine. 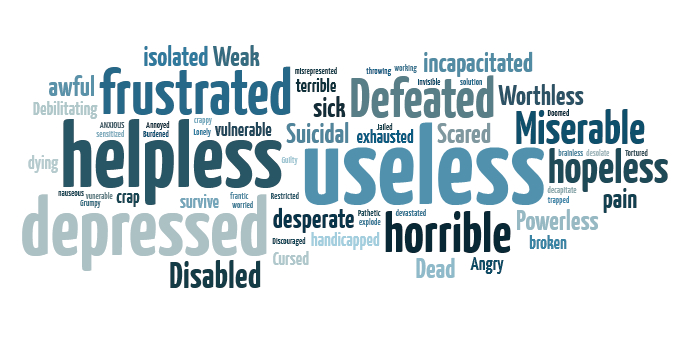 Something about our genes makes us as migraineurs very susceptible. But the hard thing is that living with chronic illness and pain also makes us more prone to depression. We get the double whammy. Sometimes the depression and its symptoms make it just as hard to function as the pain, nausea and other neurological symptoms. If you're dealing with the debilitating effects of both migraine and depression, you're not alone.

In a 2009 study researchers studied the prevalence of migraine and depression among a community of biologically related people in the Netherlands. By choosing people who live in a uniform environment and who share the same genes, researchers were able to isolate whether it was genetics or environment that made the migraineurs in the family more prone to depression than nonmigraineurs.

This study is one of the first to use a strict, accurate definition of migraine rather than relying on study participants to self select as migraine sufferers. So while the study found a less pronounced correlation between migraine and depression than previous studies, given their more accurate definition of who could be considered to have migraine, they were pleased to have established any correlation.

We are working on a new section for the Migraine.com website all about mental health issues related to migraine disease. Please hang tight while we work on these articles. Are there particular questions or issues you'd like to see addressed in our new mental health section? Please share your thoughts in the comments.

Why Migraine is More Than Just a Headache

11 comments
This article represents the opinions, thoughts, and experiences of the author; none of this content has been paid for by any advertiser. The Migraine.com team does not recommend or endorse any products or treatments discussed herein. Learn more about how we maintain editorial integrity here.