The Importance of Research:

Glaser explains, “Until we really understand what’s going on we won’t be able to develop treatments that go to the root or the cause. Right now we’re simply dealing with symptoms.” Theories have changed and evolved over the years partly due to better imaging techniques. Glaser says, “we can see what’s going on and ask the right questions.”

The MRF has awarded 51 grants so far with a record 10 grants in 2014. The MRF has seen “scientists investigating novel pain networks and chemical channels in the brain looking for new therapeutic targets,” explains Glaser. Some of the current studies are exploring fascinating new territory. One Australian study is looking at identical twins, where one has migraine and the other doesn’t, to further investigate a genetic link, and another is investigating stem cells in the treatment of chronic migraine. An American study is investigating the possible therapeutic benefits of cornmint oil administered intra-nasally. 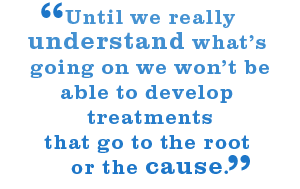 How Does Research Give Hope?

The research is focused on both short and long term solutions. Glaser says, “It’s called translatable research. Is it going to translate into something that will help people sooner than later, or even now?” Some studies may help down the road, such as the Danish Headache Center’s study to develop a human model suitable for migraine drug testing, or an Association of Migraine Disorders grant to use genetic sequencing to detect genes that play a role in migraine.

Other studies test theories that could be almost immediately helpful, such as the aforementioned cornmint oil investigation, or a University of California research project looking at the use of melatonin as a preventive for children. Glaser is excited about the possibility that some research can help people sooner than later. She says of the melatonin study, “If that works, it’ll help immediately and be available and non-toxic. And wouldn’t that be wonderful?” 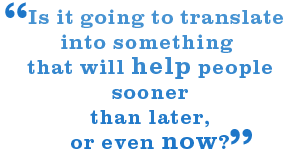 Glaser’s Encouragement to Those Still Searching:

First, be patient and persistent:

“I’ve spoken to many people who have just given up,” says Glaser. “It takes a long time to determine whether a drug or device works, and you have to give it time.”

To add to what Glaser says with my experience as a chronic migraine sufferer, I can say this is the hardest but most essential thing to do. For example, it took 6 months of following an elimination diet to determine food triggers. Cutting out all possible trigger foods took a lot of patience and willpower. When I figured out eliminating foods wasn’t much help, I had to persist and try the next thing. The longer this draws out, the easier it is to give up, but the more essential it is to keep exploring.

Glaser explains, “There are people like me who get an occasional migraine and can take over-the-counter medication and mostly treat it…. And then on the opposite extreme is someone like my daughter who needs expert care. She actually went to an inpatient unit years ago because she had no life…. I’ve seen from personal experience not only in my own family but in others, that most people really can be helped, but they must be proactive.”

The MRF compiles and updates the list of certified headache specialists in the US, of which there are about 500 currently, and also has a list of children’s headache doctors so that parents can find expert help for their kids. You can also find resources to finding a headache specialist here at migraine.com, and post questions in our forums.

How Can We Make a Difference?

Whether or not you have migraine, it’s an important, even personal issue. Glaser believes it’s personal because “even if you or someone in your family doesn’t suffer, lots of people suffer.” About 1 in 4 families and 1 in 10 people are affected by migraine, that’s about 38 million Americans that suffer from migraines. Glaser explains it as “a public health problem that people don’t even think about.” Since migraine is a chronic disease, like asthma or diabetes, it doesn’t go away. Therefore the continuing costs for healthcare and other associated expenses (such as missed work days) are high, and it has a ripple effect. She adds, “They (migraines) impact individual lives, not only because of the attack itself, but all the comorbid symptoms that can accompany migraine, such as anxiety, depression, and sleep problems. All of those health issues consume time, money, productivity, and affect quality of life.”

The answer is in the migraine community, according to Glaser. She says “There needs to be a demand by the population of sufferers and an understanding that research is the only way to find new treatments, prevention, and hopefully a cure…. If the government isn’t doing it, then we have to as a community.”

Glaser adds that parents of sufferers are often the biggest fundraisers and donors because it’s hard to be confronted by your child’s pain and not want to do something about it. She, herself, is a parent of a migraine sufferer.

For now, Glaser is hard at work hoping to someday put herself out of business. “It’s the most rewarding thing I’ve ever done,” she says. “It’s a subject I’m passionate, excited, and very optimistic about.”

To learn more about the Migraine Research Foundation and its grants, or to donate, go to www.migraineresearchfoundation.org.

23 comments
This article represents the opinions, thoughts, and experiences of the author; none of this content has been paid for by any advertiser. The Migraine.com team does not recommend or endorse any products or treatments discussed herein. Learn more about how we maintain editorial integrity here.