I think more than I write.

The angel on my shoulder encourages me and fills my head with stuff and nonsense: Janet, you're not writing because you don't yet know how to express all the deep, impressive, and wonderfully moving thoughts you're having. You have a Master's degree with a focus on creativity theory: you know that you must incubate before you can produce an original idea, an original creation! You're just incubating!

Why Can't a Cold Just Be a Cold? I Always Get a Migraine, Too.

Why Migraine is More Than Just a Headache

The cynical, self-deprecating part of me has different thoughts all together: You're a scaredy cat. From the moment you learned to put pencil to paper, you've thought--at least glancingly--that you'd become an author. You are a good writer but will never have the guts or the willpower to be a great one, the one you know you can be. So you just rest on your laurels, write nothing, and tell yourself that you'd be great...if you were in the mood to try.

Of course the truth probably runs somewhere between those two extremes. I definitely know that elements of each argument hit a little too close to home--this suggests to me that both my kind and evil sides know a bit of what's going on inside my mind regarding my self-motivation (or lack thereof).

Writing this blog has helped me in ways I could never really describe. I have a sense of community with readers and with other folks whose blogs I read. There's a whole community of us out there, a community I tapped into at just the right time, right when I was feeling most isolated about my disease. Telling my friends and family was a big step--an important one that has improved relationships and opened lines of communication. But it's also hard to post about pain and suffering when you know your mom or sister or aunt or boyfriend could be reading. Strangers out there may sympathize with our migrainous plight and wish us well, but family and friends can be hurt reading about how much of a struggle it is to live with this illness day to day. 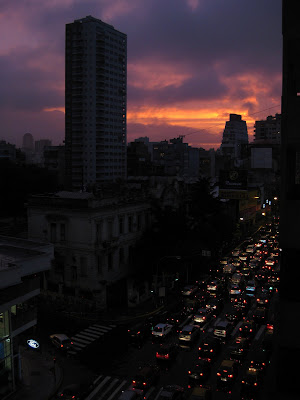 view from my apartment in Bs. As.

Recently I've been both bummed and relieved. Strange combination, I know. The month I was in Buenos Aires was wonderful and lovely and relaxing, but my migraine frequency skyrocketed. A disappointment, to say the least, especially after I'd been doing remarkably well post-December's doctor appointment. In Buenos Aires, I had to break my healthy diet rules nearly every day, as dairy and white, enriched flour and other no-nos were sometimes impossible to avoid if I wanted to have any sustenance at all. I lived with 1-2 roommates (friends) at a time in a comfy but small apartment. This led me to a truth I'd been on the brink of already: having a boyfriend as an occasional roommate is far different from having a friend-roommate. At least if the boyfriend is J. and the girlfriend is me. I know that my friends don't need to be entertained; I know that roommates/guests don't necessarily need my help and guidance and company. But, man! It was definitely more of an effort sharing a space with them than it is sharing one with J. (We have yet to do an official move-in, but it may happen by the end of this year. Maybe. We'll see.)

But back to the matter at hand. Since I've been back from Buenos Aires, I've not had one migraine. Not a one! I've relished the mere thought of being able to eat my meals in my own house. I've eated two meals out in two weeks. (Well, three meals if you count that very necessary 3 AM snack at Huddle house with Christa last weekend.) This is not like me. I tend to eat out a few days a week. But now the thoughts of rice and stir-fried vegetables trump any desire for pizza, heretofore desirable cream sauces and pasta, etc. I feel remarkably better when I eat well, and the truth of that was emphasized by the month in Argentina when I couldn't stick to my diet rules. Now I'm feeling no migraine pain and have no tummy issues. Whew.

However, something else is afoot. I'm exhausted, achey, tired, and more all the time. The list goes on and on. I've a sneaking suspicion something else is going on with my body. Next week I see the doctor again and will figure some more stuff out. Maybe results from yesterday's blood work will yield some answers.

All in all, things are going well and I'm confident they'll keep getting better. Hope you're feeling similarly about your own lives.

Have you checked out the new Community Hub yet?