In mid-July I had the pleasure of interviewing Cindy McCain, spokesperson for the American Headache Society and wife of Senator John McCain. For thirty minutes we talked about living with migraine, coping with hectic schedules, and the importance of increasing awareness of this debilitating illness.

Get Involved
Patient Advocates
Getting Help
Share your Migraine Story

A quick disclaimer before you go on to the interview: While I wasn’t able to feverishly take notes as rapidly as I would’ve liked, I did manage to get some insightful quotes from Mrs. McCain. Anything you see in quotation marks is what Mrs. McCain actually said. My questions (in bold) should be taken as a general account of what I posed, as I didn’t read them off my list word-for word.

Migraine Girl (MG): Thank you for being courageous enough to step out and tell the public about this debilitating condition. I’ve read lots of articles about you, and there are hundreds of comments from migraineurs out there who are so grateful to have an advocate in you.

At what point did you make the decision to “go public,” so to speak? 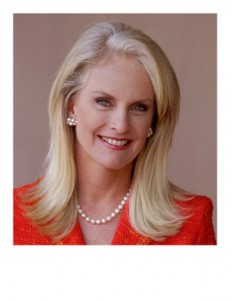 Cindy McCain (CM): “It was post-election,” she noted. Mrs. McCain told me about how she and her husband were essentially “living in a fishbowl” during the presidential race and that there was “always [the] opportunity for the press to misrepresent” what was happening in their lives. For this reason, Mrs. McCain chose to hide her illness as best she could, meaning there were times when she was in utter migraine agony but had to put on a brave front, facing those bright spotlights, flashbulbs, and loudspeakers. There was no telling how the press might spin her actions if she appeared ill or feeble. Dealing with her migraine “was the biggest thing for me,” especially if one was just coming on when she was in the midst of a public appearance. “They [the press] pick on every little detail. God forbid I sat down in the chair—the one that was put there for me to sit in!”

She confessed that not fessing up to her illness may seem like “kind of a teenage thing to do,” but she really thought it would be best to remain mum until after the election. She “felt strongly about not saying anything about it” and I found myself identifying with her and really sympathizing for the various pressures that must have been omnipresent during the campaign.

MG: Since your announcement, have any friends, colleagues, or family members also come out of the woodwork to confess that they, too, suffer from migraine.

CM: “So many,” Mrs. McCain replied. “There were people that we worked with closely….I never knew that they had them. Lots and lots of people.” Mrs. McCain doesn’t “wish this on anyone” but was grateful to know that there were many others who could identify with her struggle.

MG: Do you remember your first migraine attack?

CM: “Very well,” Mrs. McCain said with what sounded like a wry smile, “And I’m sure you do, too!” Mrs. McCain’s migraines “didn’t come on until I was close to forty years old.” In retrospect, Mrs. McCain thinks she may have had migraine without headache when she was younger than forty, as the recalls dealing with elements of aura when younger (“I had the aura, the ziggy lines”). She admitted that her first migraine with head pain “scared me so bad I went to the hospital.” It took “quite awhile to be truly diagnosed,” and until then she was really worried about what was happening with her body.

The path to diagnosis was anything but smooth. One of her first doctors told her to go home, have a drink and try to relax. “It was frustrating,” Mrs. McCain recalled with passion. She knew something more serious was going on: “I knew better.”

MG: Do you have any advice for other prominent people with this disease, people who have yet to step out and share their stories?

CM: “I know several prominent people who have them [migraines] severely,” Mrs. McCain said. She says, “I understand why they keep quiet,” but lets her friends know that if and when they want to share their stories, she’ll help them as best she can. She and her migraine comrades “share tips and tricks” for coping.

MG: You keep a very busy schedule. What tips would you give other go-getters with migraine who have busy lives?

CM: Travel is a major part of Mrs. McCain’s life, and it serves as a virtual Pandora’s box of migraine triggers for many. Mrs. McCain notes that traveling disrupts the routine she has tried so hard to establish, but she does her best to be as consistent with her schedule as possible. “I have a routine….If I veer from that routine, I’m sunk. I’m dead.” While she chose not to speak in detail about her medical routine, Mrs. McCain did say, “I really believe in B12.”

MG: Does migraine run in your family?

CM: “I think so,” Mrs. McCain replied. She thinks her grandmother had migraines—“they called them ‘spells.’” She believes her grandfather was also afflicted.

MG: My colleague Teri Robert interviewed you in September 2009. In one of Teri’s articles, you are quoted as saying: "I'm going to put together an action committee to go door-to-door in Congress….We need to testify in front of Congress."

This is a huge undertaking, and I imagine it takes a lot of work. Has there been any progress on this?

CM: “The biggest issue nationally—and internationally—is funding….[Migraine] is so drastically under-funded it’s ridiculous,” Mrs. McCain said. In terms of progress on her goal, things are moving along slowly but smoothly. “We’re still in the process,” she explained. “I really think we can find a cure for this,” she said, with a genuine note in her voice. She is hoping that a group of people will be able to testify on Capitol Hill this coming fall (we at Migraine.com will keep you posted on that!).

With that, Mrs. McCain had some words of encouragement for you, our readers. “Write to your representatives [and] keep the issue alive,” she suggested. The more that migraineurs speak up and write in about what living with migraine is really like, the more we can keep this “issue in the forefront” of lawmakers’ minds.

Tomorrow, I will post the conclusion of my interview with Mrs. McCain.

9 Things People With Chronic Migraine Want You to Know

40 comments
This article represents the opinions, thoughts, and experiences of the author; none of this content has been paid for by any advertiser. The Migraine.com team does not recommend or endorse any products or treatments discussed herein. Learn more about how we maintain editorial integrity here.