Two issues that can significantly impact the medications we take when a Migraine occurs are vomiting and gastric stasis. Obviously, oral medications may not be very effective if patients vomit soon after taking them. There are also safety issues involved due to this problem because some Migraineurs have overdosed with their medications because they redosed after vomiting, not realizing that some of the medication had already been absorbed into their systems. Gastric stasis is delayed emptying of the stomach. Some research has indicated that gastric stasis can occur with Migraine and, in turn, leave medication in the stomach and unabsorbed. 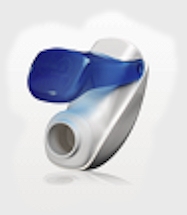 One new Migraine abortive medication in development is Levadex (formerly MAP0004), developed by MAP Pharmaceuticals. Levadex is an orally inhaled form of dihydroergotamine, the same medication in D.H.E. 45 and migranal Nasal Spray. The oral inhalation delivery system delivers the medication through the lungs to the systemic circulation using MAP's proprietary TEMPO inhaler (see image on right).

There are several phases to clinical trials. We usually hear mostly about Phase III trials.

Phase II study of MAP0004 (before it was named Levadex):

The Phase III study of Levadex:

Also called FREEDOM-301, the Phase III study provided the additional date needed for MAP to submit a New Drug Application (NDA) to the United States Food and Drug Administration (FDA) in May of 2011. The NDA is still pending.

In the FREEDOM-301 study, the efficacy (the ability of a medication to produce the desired results) assessment focused on four major Migraine symptoms at the standard two-hour time point for such Migraine studies. All four co-primary endpoints (the overall outcomes that the study was designed to evaluate) for Levadex were met at two hours:

"In this study, MAP0004 was effective and well tolerated for the acute treatment of migraine with or without aura, providing statistically significant pain relief and freedom from photophobia, phonophobia, and nausea in adults with migraine compared with placebo."

On February 23, 2012, MAP announced that the U.S. Patent and Trademarked office has granted them a patent on the TEMPO inhaler based on their discovery that dihydroergotamine can be "administered to achieve pharmacokinetic profiles that result in rapid efficacy while minimizing side effects that are typically seen with other migraine drugs." The patent will expire in 2028.

Levadex may not be a new medication, but it IS a new method of delivery, one that has the potential to offer relief to Migraineurs who now have problems with current methods of treatment. This inhalation delivery may prove superior for Migraineurs for whom oral medications are ineffective, those for whom nasal sprays are difficult or ineffective, and those who don't like or cannot use injections.

Overall, Levadex will be a welcome addition to the Migraineur's arsenal.

Not Too Bumpy, Not Too Bright: Goldilocks Desperately Searching for a Migraine Friendly Car

10 Ways to Help Someone With Migraine