Italian researchers employed a different method of examining information that had been uncovered in previous research studies about the brains of people living with Migraine. By using surface-based MRI to examine the brains of study participants and specially developed software for analyzing the MRI results, the researchers were able to measure the patients' cortical thickness and identify abnormalities in the cortical region of their brains. 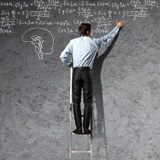 Migraineurs also had white matter hyperintensities on their brains more frequently than the control group. These abnormalities may be the result of either predisposition or disease-related processes. The lead researcher believes the abnormalities are more likely attributable to a predisposition that makes Migraine patients more susceptible to pain and abnormal processing of painful stimuli. If this could be confirmed by building on this research it would give us important information about Migraine pathophysiology, which could lead to much better treatment and prevention options.

We already have a dramatically altered understanding of Migraine pathophysiology as compared to just 25-30 years ago. Experts used to believe Migraines were attributable to the expansion and contraction of blood vessels in the brain. This theory is known as the Vascular Theory of Migraine. Based on increasingly sophisticated research utilizing state of the art imaging we now know that while vascular changes usually occur during a Migraine attack, not every patient experiences them. Experts no longer believe vascular changes play a primary role in the Migraine process.

This research team will continue to examine the Migraine patients who were studied in hopes of determining whether the abnormalities they initially observed stay the same or change and at what rate.

Holding on to Hope With Chronic Migraine

8 comments
This article represents the opinions, thoughts, and experiences of the author; none of this content has been paid for by any advertiser. The Migraine.com team does not recommend or endorse any products or treatments discussed herein. Learn more about how we maintain editorial integrity here.