Pain is controlled by nerves. Some pain, like pain from touching a hot stove, teaches important protection lessons. With chronic pain, like chronic low back pain and migraine, the brain and nerves send pain messages that don't provide useful information about avoiding an impending threat. Instead these nerve signals are nuisance messages that can be debilitating.

For patients who have failed standard medical treatment of chronic pain, invasive treatments that directly target abnormal nerve signaling can sometimes be helpful. 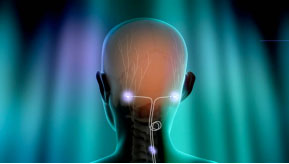 Illustration of the Genesisâ„¢ Neurostimulation System, an investigational device being evaluated in clinical research studies for chronic migraine headache. The Genesis system emits mild electrical pulses to generate peripheral nerve stimulation (PNS) of the occipital nerve in the back of the head. 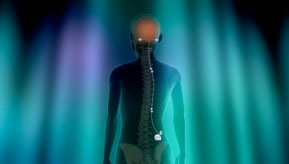 St. Jude Medical just released data from a study testing neuromodulation for chronic migraine. They tested a device that is implanted under the skin at the back of the head and delivers small, electrical impulses to the occipital nerves. The occipital nerves leave the top of the neck and travel over the back of the head. Other studies have shown that blocking activity of the occipital nerves through nerve blocks can temporarily reduce headache activity for some people. Using the newly tested nerve stimulation system, St. Jude Medical researchers reported a 28 percent decrease in headache frequency after 12 weeks compared with only a 4 percent drop among patients tested with a placebo.

What do these results mean for you? Should every migraine sufferer think about getting a nerve stimulator? Probably not. The people tested in this study had headaches nearly every day. The effectiveness was also less than what might be expected in the average migraine sufferer using more standard treatments. Neuromodulation may, however, proved to be a valuable option for those people with very frequent and disabling attacks who have given standard treatments a good try and have failed to respond adequately to those treatments. It will be important to watch as other studies are conducted by other researchers testing this device to confirm these initial good results.

My Chronic Migraine and Comorbidities

9 Things People With Chronic Migraine Want You to Know

40 comments
This article represents the opinions, thoughts, and experiences of the author; none of this content has been paid for by any advertiser. The Migraine.com team does not recommend or endorse any products or treatments discussed herein. Learn more about how we maintain editorial integrity here.