Philadelphia, PA — An ongoing poll on the website Migraine.com asking migraine sufferers “Which type of aura symptoms do you experience?” has received over 1,500 votes to date. Migraine aura impacts about 10 million migraine sufferers in the U.S. and refers to a range of symptoms that typically strike before the head pain phase in a migraine attack. 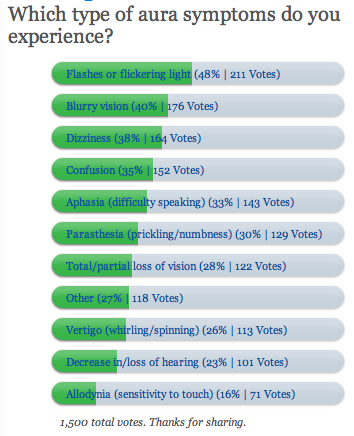 The top two commonly reported migraine aura symptom were flashes / flickering lights and blurry vision with 48% and 40% of votes respectively. It is thought that auras are caused by a wave of nerve signals or impulses that move across the brain, causing a disruption in normal activity in those parts of the brain. In certain patients, the changes in the brain referred to as a cortical spreading depression can be seen slowly moving across part of the brain.

Dizziness and confusion comes as close third and forth common migraine aura symptoms. Often people who suffer from migraines use the words dizziness and lightheadedness interchangeably, because the symptoms are so similar. The causes of dizziness usually come from triggers such as foods, smells, and lack of sleep or alcohol.

As witnessed with CBS news reporter Serene Branson, who experienced symptoms of complex migraine while on the air, difficulty speaking was the fifth most reported migraine aura symptoms with 33% of votes.

Other poll highlights to date:

Please visit the migraine aura symptom page for full poll results and to learn more about the most common migraine symptoms.

About the author: Olivier Chateau is Co Founder of Health Union LLC, the independent company that brings you Migraine.com