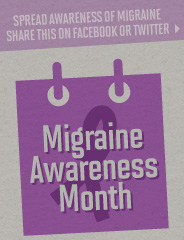 Let's take a look at some of the most prevalent Migraine myths and the corresponding truths. Let's arm ourselves with the truth so that when we hear these myths, we can do some myth busting.

Myth #1: A Migraine is just a bad headache.

Myth #2: Migraines don't last for days, and nobody has a Migraine every day.

Truth: The "typical" Migraine lasts from four to 72 hours, but Migraines can last longer. They sometimes last days, weeks, or even months. When they last longer than 72 hours, we need to contact our doctors. Unfortunately, some people do have Migraines nearly daily and even daily. Chronic Migraine (CM) is all too real. By definition, CM is having Migraines or tension-type headaches 15 or more days per month. The reality is that many people with CM have a Migraine or headache every day. Although the symptoms and pain levels of CM are similar to those of episodic Migraine (less than 15 days per month), studies have shown that the frequency of the Migraines dramatically increases the burden and causes CM to have significantly higher impact than episodic Migraine. Other studies have shown that the stigma associated with CM is also higher.

Truth: Although a Migraine itself may not be life-threatening, complications of Migraines and risk factors associated with Migraine can be. Studies have confirmed a link between Migraine and stroke and other cardiovascular diseases and events. Studies have also confirmed a link between Migraine and suicide. There is much that could be written on this topic, but consider just these two statistics.

Myth #4: Any doctor will recognize and properly treat Migraine.

Myth #5: Only women have Migraines.

Myth #6: Only adults have Migraines.

Truth: People of all ages have Migraines. Some children have Migraines while very young, before they're even old enough to tell anyone what's wrong. With children that young, diagnosis is achieved by reviewing family medical history and observing the child's behavior.

Myth #8: People who get Migraines are intelligent, highly-achieving, high-strung people with a "Migraine personality."

Truth: At one time, there was a theory that there was a set of "personality features and reactions dominant in individuals with migraine" that included "Feelings of insecurity with tension manifested as inflexibility, conscientiousness, meticulousness, perfectionism, and resentment" that became referred to as the "Migraine personality."6

These "notions regarding the generalizability of the migraine personality have not withstood the test of time; in fact, current research suggests that there is no one dominant personality profile among those with migraine."6

Myth #9: There's nothing that can be done about Migraines. We have to "just live with them."

Truth: This is far from the truth. Although there is no cure for Migraine disease at this time, we do not have to "just live with them." With the help of a doctor who truly understand the disease, we can work on trigger identification and management and treatments toward effective Migraine management. There are many options for Migraine prevention, more than ever before. There is a small percentage of Migraineurs, approximately 5%, with chronic and intractable (Migraines that don't respond to medications) Migraines who continue to struggle, even with these options. The need for increased awareness and research funding on a federal level is largely responsible for the lack of progress in this area.

Part 2 Lessons Learned: Through the Eyes of a Person with Chronic Migraine

5 comments
This article represents the opinions, thoughts, and experiences of the author; none of this content has been paid for by any advertiser. The Migraine.com team does not recommend or endorse any products or treatments discussed herein. Learn more about how we maintain editorial integrity here.