The Food & Drug Administration (FDA) announced recently that Topamax (generic name topiramate) has received approval for Migraine prevention in the adolescent population ages 12-17 years. Topamax is the first and only medication FDA approved for prevention in the 12-17 age population. 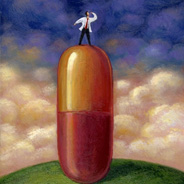 The medication has been used off label for management of frequent and/or debilitating Migraine attacks in people younger than 18 for some time. But with FDA approval comes more guidance for physicians, parents and patients about proper dosing, side effects, risks and other treatment guidelines.

Migraine occurs in at least 15% of the adolescent population, and by some estimates as many of one third of these kids between the ages of 12 and 17 are candidates for preventive therapies. An aggressive approach to Migraine prevention in kids this age may help prevent transformation to Chronic Migraine later in life.

According to research presented at the 50th Annual Scientific Meeting of the American Headache Society in 2008, the use of Topamax for Migraine prevention in patients aged 12-17 was associated with a statistically significant reduction in Migraine frequency compared to placebo (72% reduction with Topamax versus 44% reduction with placebo). The study included 103 Migraine patients with an at least six month history of Migraine from 31 treatment centers across the United States.

Topamax is generally safe and effective in both adult and adolescent populations. But in both groups debilitating side effects can greatly diminish its tolerability. Cognitive side effects are some of the most frequently cited and often lead to discontinuation of the medication.

Researchers concluded in a 2010 study of the cognitive effects of Topamax among  adolescents that Topamax was tolerable in this population. There were slightly decreased rates of cognitive processing among patients taking 100 mg of Topamax versus placebo, but learning, memory and executive functions were found to be unchanged.

While Topamax is otherwise considered safe, it is contraindicated in pregnant women because of the risk of serious birth defects (cleft lip and/or palate). Guidelines recommend women of childbearing age be on effective form of birth control if they are taking Topamax.

While it may not seem necessary to bring this up with regard to the 12-17 years of age population, the reality is that many young women in this age range are of child bearing age and also sexually active. Since it seems safe to say most pregnancies in this age range are unplanned, it's all the more important for physicians, parents and patients to be aware of the risks and take appropriate steps to prevent unintended pregnancies among adolescent women taking Topamax. If effective birth control is not considered an acceptable option for any reason, Topamax may not be a good fit for these young women.

5 Guidelines for Questioning Your Doctors About Migraine Treatments

How CGRPs for Cluster Headache Differ from Migraine Disease