Trigeminal neuralgia, also known as tic douloureux, is a chronic nerve disorder that causes one-sided, sudden bouts of stabbing, burning or shooting pain in the face that can eventually evolve into constant pain. Trigeminal neuralgia is commonly experienced by patients living with migraine disease and other headache disorders, such as cluster headaches. 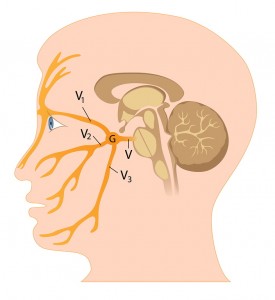 Trigeminal neuralgia is most often thought to be caused by the pressure of a blood vessel resting on the nerves. It is also associated with multiple sclerosis. Rarely it is associated with pressure from a tumor. In some patients a cause is never identified.

Patients typically experience the painful sensations associated with trigeminal neuralgia when they engage in activities that involve contact with or movement of the face, such as shaving, putting on makeup, brushing teeth, eating, drinking, talking, etc.

There are a variety of treatments available for patients living with this condition. Botox injections have been successfully used for treatment of both trigeminal neuralgia and migraine. There is also overlap among medications that have proven useful for both conditions, such as anticonvulsants, antidepressants and muscle relaxers.

Additionally, some patients find relief with surgerical procedures. This can include options such as cutting or destruction of the trigeminal nerves, radiofrequency nerve ablation, electrostimulation or gamma knife radiosurgery. If a tumor or blood vessel is thought to be the cause of the patient's pain, there are surgical procedures to address these issues.

The Facial Pain Association (formerly the Trigeminal Neuralgia Association) is a great source of information and support for people living with trigeminal neuralgia. Visit their website at: www.fpa-support.org

Do any of you live with this condition? What treatments, if any, have been helpful for you?

Pain Isn't to Blame for Other Migraine Symptoms

6 comments
This article represents the opinions, thoughts, and experiences of the author; none of this content has been paid for by any advertiser. The Migraine.com team does not recommend or endorse any products or treatments discussed herein. Learn more about how we maintain editorial integrity here.