The Migraine In America 2015 online survey was conducted to gather insights from over 4,500 individuals currently diagnosed with migraines in hopes of better understanding their symptoms, life impact and treatment experience. Respondents were primarily female and over the age of 40, as well as being married with children and located across the U.S. Over half of respondents experienced 8 or more migraine attacks each month, and almost half experienced migraine symptoms on 15 or more days a month.

The 2015 survey continued to illustrate the challenges and impact of migraine, building upon findings from previous surveys: 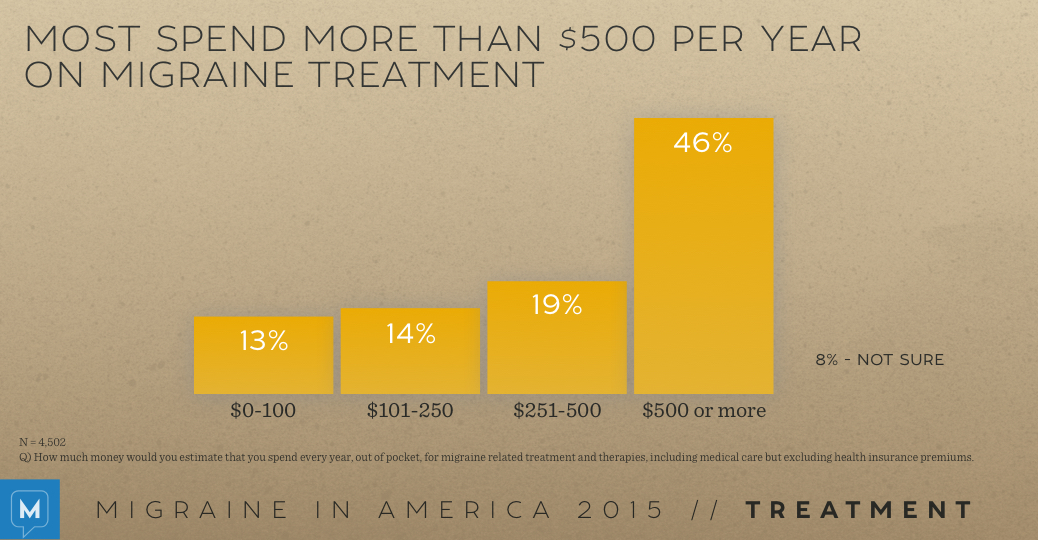 Among preventive migraine medications, antiepileptic drugs were currently used by almost a third of users and antidepressants by over 1⁄4. However over half of current antidepressant users suffered from depression and/or anxiety, so usage may also be to treat these conditions and not migraine exclusively. Despite having the highest abandonment rate, Antiepileptic drugs had the highest level of satisfaction among current preventive users (51%).

75% of abortive or rescue medication users cited they would initiate treatment within an hour of suspecting they are getting a migraine, only 8% waited over 2 hours.

Of those who usually waited more than 2 hours, they typically didn’t want to overuse medication or waste it, as well as ensure that they really were getting a migraine.

Imitrex had the highest usage rate among the triptan tablet medications surveyed, as well as among the nasal sprays surveyed. For the triptans used within the previous 3 months, at least half of respondents reported satisfaction with the medication’s efficacy and also with its tolerability. 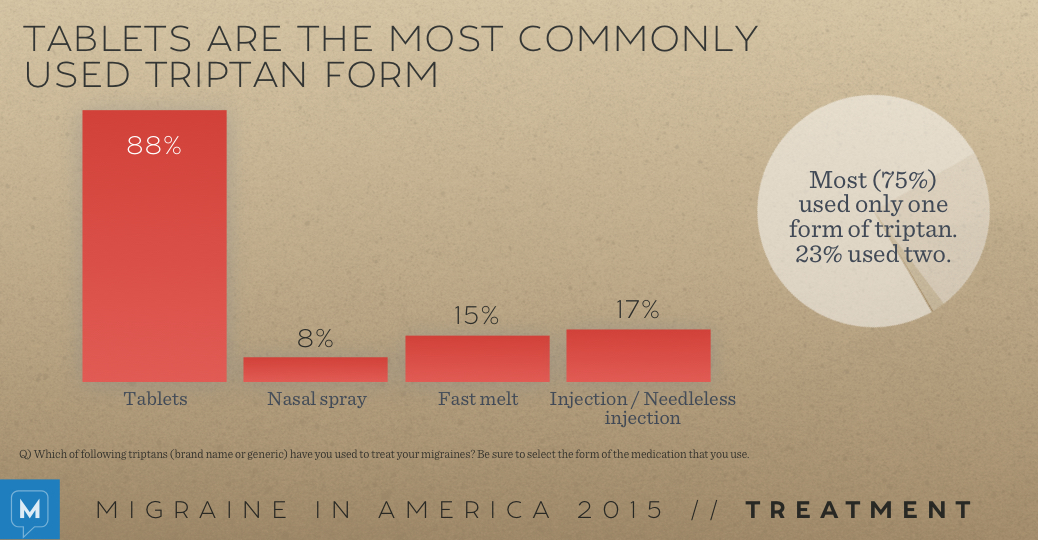 Over 2.5K respondents had used a triptan within the past 3 months - primarily tablets. About 1 in 4 had used 2 or more forms of triptans.

Among current triptan users, most had been using their current medication for over a year – with Imitrex having the highest proportion of long term users. 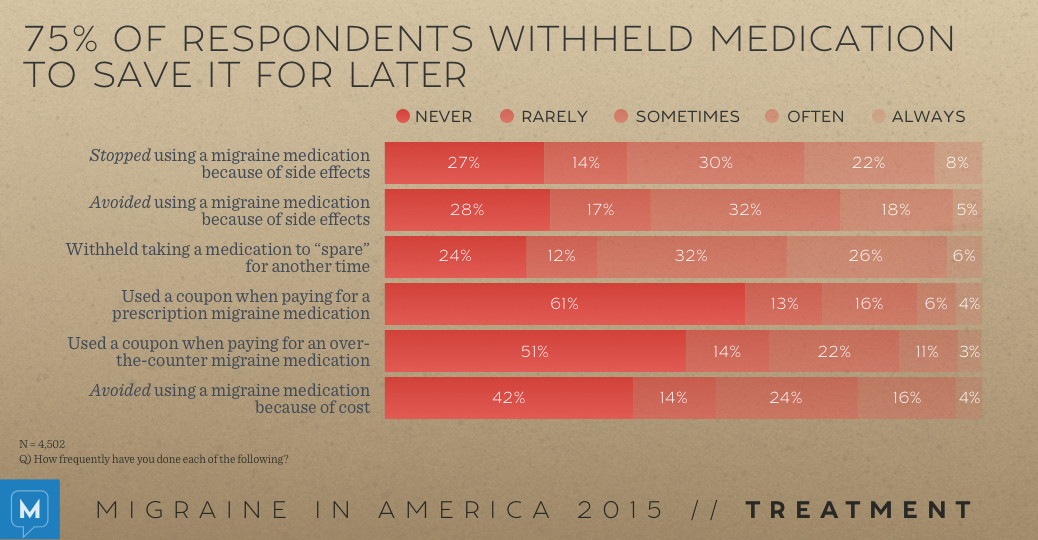 3 out of 4 respondents at some point in their treatment journey had withheld taking a medication to spare it for another time. Side effects also played a role in medication avoidance for over half of respondents. 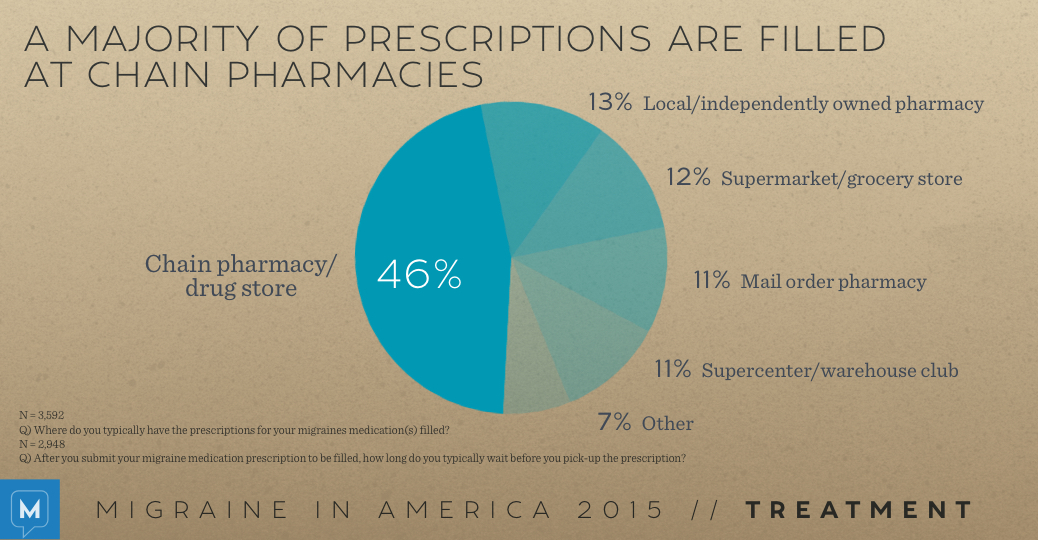 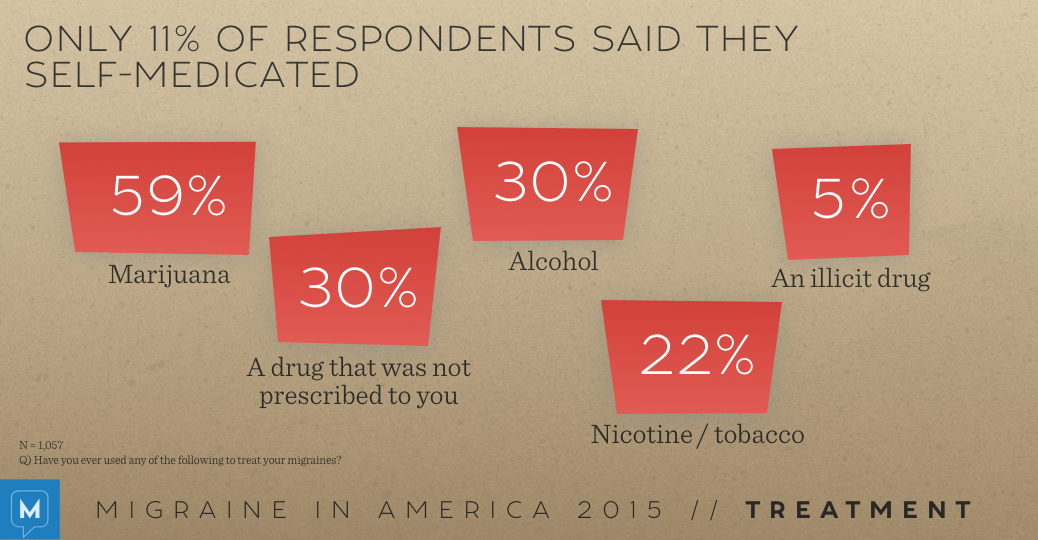 Self-medication was currently being used by a small proportion of respondents (11%). Marijuana was by far the most commonly used among current self- medicators (59%).

71% of respondents had tried or were currently using complementary and alternative therapies for their migraines. Sleep / rest and dark rooms were the most prevalent, consistently utilized by at least half of current users. 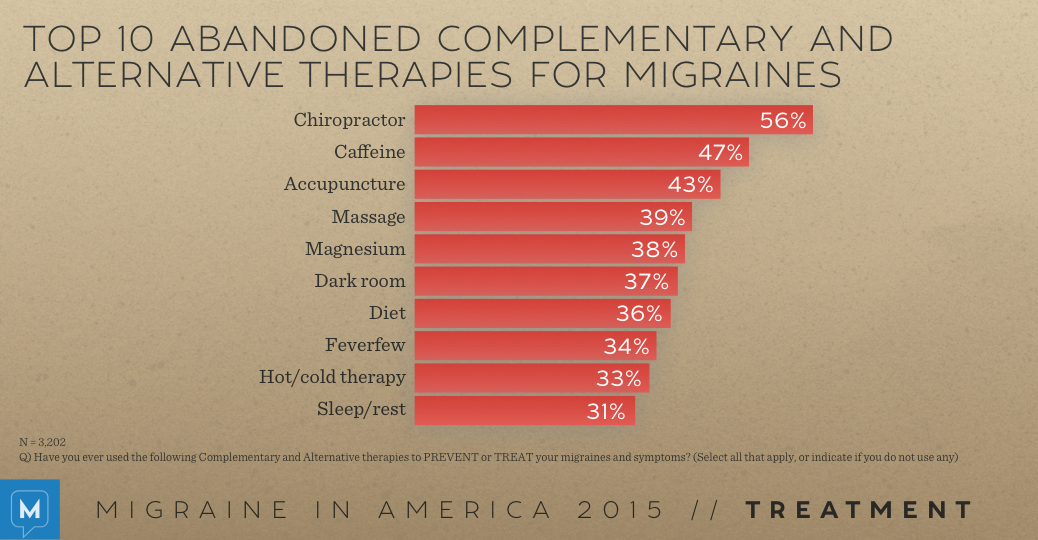 A variety of therapies have been used in attempt to reduce or stop migraine symptoms, however, many have not persisted with those they have tried. Chiropractic, caffeine use and acupuncture were most discontinued therapies, having been tried in the past but no longer used. 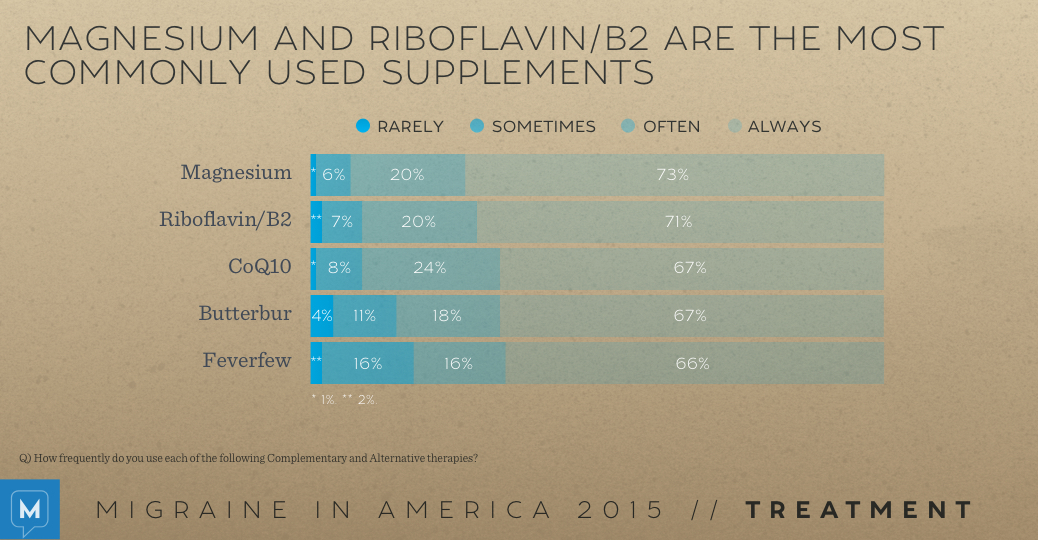 Dietary supplements, such as magnesium, riboflavin, butterbur, CoQ10, and feverfew, were the alternative therapies used most frequently. 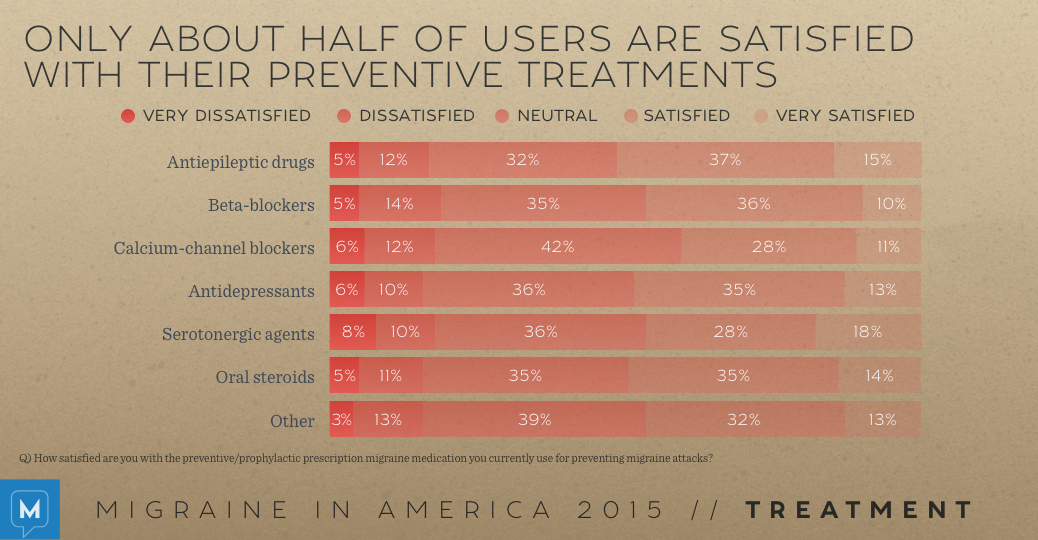 Despite all the available options, it’s important to
remember that few of these options were developed
specifically for the treatment of migraine. Therefore it’s not
surprising that the overall satisfaction level, with even the
most commonly used migraine treatments, remains at only
about half of users.

51 comments
This article represents the opinions, thoughts, and experiences of the author; none of this content has been paid for by any advertiser. The Migraine.com team does not recommend or endorse any products or treatments discussed herein. Learn more about how we maintain editorial integrity here.