A review of the "Unofficial Migraine Types" identified by The Migraine Girl . The Bulldozer, the Creeper, the Wave.... and so many more! 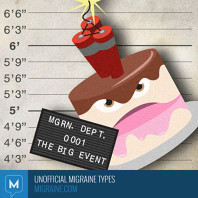 I have this particular brand of migraine discomfort that pops up during major events for me where I have to speak or even just be “on” and working with large groups of people… The Big Event Migraine can be a slow builder, or it can appear seemingly out of nowhere once you’ve finally reached the point where you think to yourself, “Phew! I’m in the clear! No migraine for me today.” 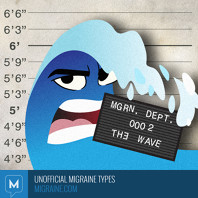 The Wave, generally speaking, is a gentle phenomenon. (Think the Atlantic Coast as opposed to the Pacific.) For a few minutes, you are completely sure that a migraine is here, and if you were the teeniest bit less lazy, you would have walked over to your purse by now to either spray some topical magnesium spray or to bite the bullet and have your Imitrex. Once you finally motivate yourself, you realize that the migraine—or whatever it was—is gone. You feel fine. You might not feel incredible, but you no longer are experiencing the telltale signs of an attack. “Weird,” you think. “What was that?” 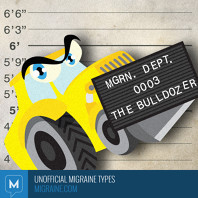 A barely-audible rumble approaches you from the left. A sudden and profound sense of discomfort niggles its way into your head. “Something’s wrong,” you think out of the blue. “Did I forget something important? Something’s not right.” The woman at the table next to you gets up to go and, even though she’s been five feet away for the last hour, suddenly a whiff of her perfume seems to slap you across the face. The squeak of her chair on the outdoor patio feels like a knife in your grey matter. “Are you okay?” your friend asks the very minute you realize what’s happening: YOU ARE BEING BULLDOZED BY THE BULLDOZER MIGRAINE. 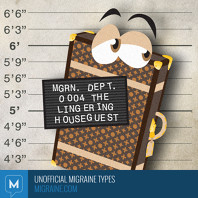 This migraine may or may not be severe. The thing that puts it in the lingering houseguest category is that it takes a long while to go away. It just hangs out. You invited it in, and now that you’re ready for it to leave, it’s hard to show it to the door.

My brain felt slightly too small for my skull or something. It was like I had a skull within a skull, or a brain within a brain within a brain. Every step I took, the insides of my head jumped a bit and I suddenly had a very clear image of this rare but very distinct type of migraine I get sometimes: The Russian Nesting Doll Migraine. 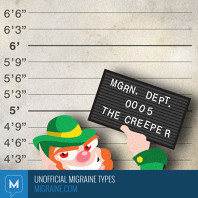 The Creeper, in my warped imagination, is like this mean little leprechaun figure who wants to just remind you that it’s here, that at any second it can highjack your entire day or your entire week. Feeling good for a few minutes? Well, have a dose of this photophobia and sense that uneasy feeling you get shortly before a so-called “real” migraine sets in. The Creeper may never show up that day, but it has let you know, beyond the shadow of a doubt, that there’s no way you’re safe from migraine today. 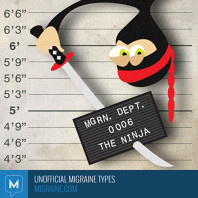 The Ninja has no regard for what you have planned for the day. Unlike other migraines I’ve described in my Completely Unofficial, Made-Up Migraine Types posts, this one doesn’t give you any warning whatsoever. You have no idea your day is about to be highjacked. With The Creeper, you know something’s afoot, even if the full attack never sets in all the way. With The Ninja, you think everything is better than it’s been in awhile. 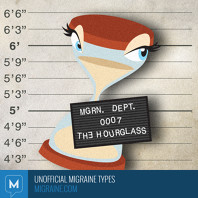 The Hourglass is very slow and deliberate. Your day starts out fine. You may not feel incredible, but you certainly don’t have a migraine. You go about your routine, perhaps getting up and showering and heading to work. You make sure to eat balanced meals and even managed to go for a little walk between breakfast and work. But you have this persistent, nagging sensation in your brain as the day goes on. One grain of sand after another is filling up your hourglass/sandbag, making it harder and harder to go about your day.

Sometimes, at least in my experience, a migraine attack can persist despite treatment, and it’s not due to the rebound effect (at least according to my own research and my neurologist’s opinion). Rather, the migraine is a zombie, its body unable to be eradicated. Sure, you can wound it and perhaps even temporarily weaken it, but there is no killing The Zombie Migraine. 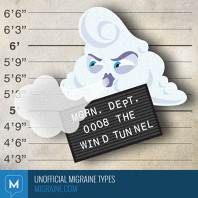 My most distracting and memorable headaches of childhood and adolescence were what I still think of as the “wind tunnel” headaches. I recall trying to explain the feeling to a friend who wanted to know why that day’s headache felt different from the occasional tension headaches we were all accustomed to by early adolescence. I said something to the effect of, “It’s like the left side of my head has been hollowed out, but not with a knife or anything. It’s just that there’s a long, thin tunnel that goes from the front of my head to the back. And then cold wind is blowing through it.” 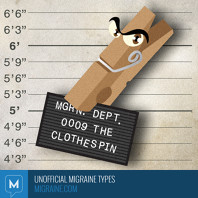 So then the clothespin squeezes behind my left eye, just a little. It’s as if whoever’s holding it isn’t fully letting go of the clothespin, so it’s not squeezing with all its might. It’s a warning, a signal that I need to be more careful. 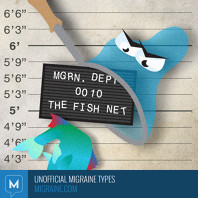 The Fish Net Migraine allows you to live life normally most of the day. You swim about your world, relatively carefree and able to make your own choices. The net travels along with you, creating a breathable bubble around you that gives you the impression that you’re migraine-free. Oh, but then! It can take action when you least expect it.

The Kidnapper may at first seem similar to The Ninja, but its after-effects can be more nefarious. When the Kidnapper shows up, you or may or may not have been warned by way of prodrome symptoms. The Kidnapper seems like a routine, low-level migraine at first, but it differs from other attacks in that it whisks you away and leaves you (sometimes literally) in a dark room, away from the people you love and the work you need to accomplish. 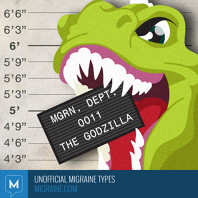 The Migraine Godzilla tries to open her eyes one morning only to realize that, for the third day in a row, she has awakened with the same persistent migraine. Her head is throbbing gently—the pain isn’t bad as long as she lies still.

The “Case of the Missing Migraine”

The Missing Migraine can be disorienting. It’s like staring at your phone, waiting for it to ring—but it doesn’t. It’s like watching a ball roll across a table but, instead of its rolling to the edge and falling onto the floor with a series of bounces, it slows to a full stop before it has a chance to tumble to the ground. It can be hard to enjoy your migraine-free time when you suspect a migraine is lurking around the corner.