To go along with this month's theme on Migraine.com, some of us are writing about our own pets, and how they've helped us and comforted us through our illness. This is the story of how my previously non-dog family got a dog.

A year of changes

In 2013, John and I thought it would be smart to both quit our perfectly decent jobs that were making us totally miserable. Well, of course it didn't happen just like that, but I had become so sick and deep into severe chronic migraine that I was missing too many shifts and all my co-workers, except one, were starting to hate me. We thought I could pull my retirement to make up for the lost salary, I'd take some time off and “heal” and then look for a new job in the fall.

Moving across the country

John ended up quitting his job as a kindergarten teacher as well, with the same thoughts about his retirement fund. Retirement, right? That was the future. We had a now problem, not a future problem. Then we decided to try to move across the country to San Francisco. It was a really weird year.

But deciding to adopt a dog first!

The one thing we definitely did rightin 2013 was adopt a dog. I knew we probably weren't going to move, even though we were selling a lot of our stuff and talking to a realtor. X loves animals so much that at the age of 8 she'd contacted a local animal rescue organization to try to volunteer and was told she was too young, so I'd decided she should have a dog, even though John and I had previously agreed we probably should never have one due to our lives always being so chaotic. We ended up telling the girls we'd get one after we moved, but one morning I just got up and decided that we were going to get a dog NOW.

When I was little and lived in a rented farmhouse with an orchard and barns and a windmill, I'd had a dog. She was a standard collie named Lady. So I told the girls I wanted to look for a collie mix rescue. After having to give Lady away when I was seven, I'd never had another dog and had strictly been a cat person. I wasn't sure I knew what I was getting myself into, but I convinced John that I did, and plunged ahead. X and I searched petfinder.com for young (not puppy) collie mix rescue dogs needing adoption in our area.

Right away, we zeroed in on a headshot of a yellow dog with a white nose stripe, one ear folded and one ear straight. Clicking on the photo we saw that the dog was a female, around 9 months when found wandering the woods, a collie mix, though her hair was short, currently named Dottie and living with a foster family in Athens, Ohio. Given that I had gone to college in Athens at Ohio University, it felt meant to be, even though it would be a four hour drive to get her.

I called the Friends of the Shelter Dogs organization, who told me that they weren't sure what had happened to Dottie initially, but she had been found in the woods with a sibling who hadn't survived. They explained how the adoption process worked, and gave me the phone number for the foster family. I called them and talked to Sara, who taught English at OU (which had been my major) and had two daughters the exact age of my daughters. We hit it off on the phone immediately and Sara said they had become attached to Dottie and she was very special and didn't want to let her go to just anyone. She said she didn't think we sounded like just anyone. 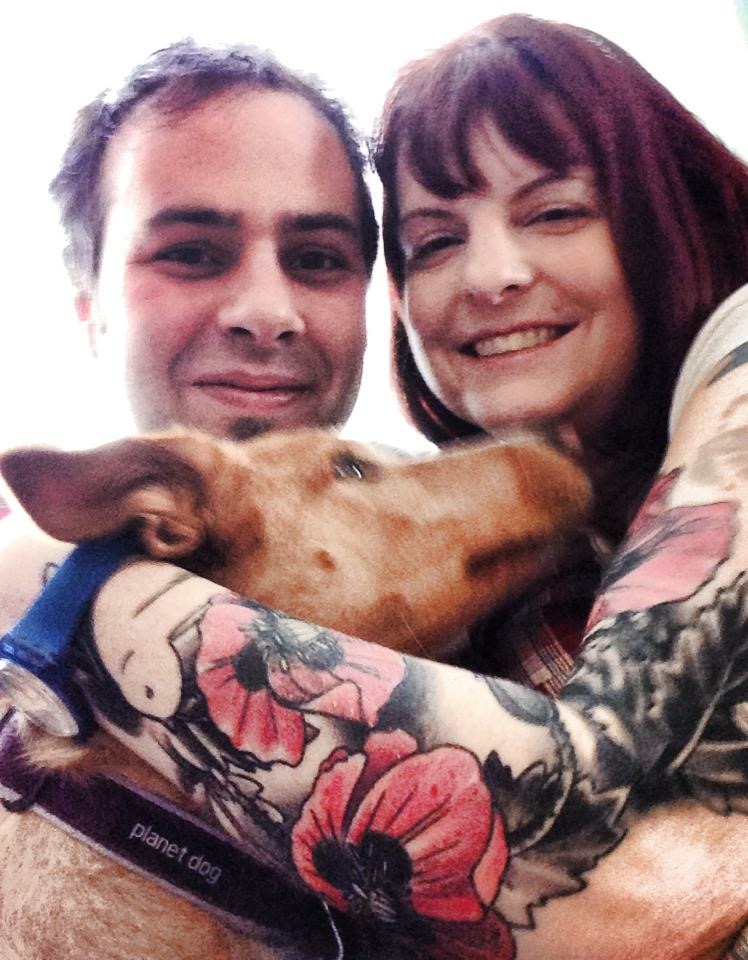 We decided to name her Asia Dot, keeping the “Dottie” Sara had given her in honor of her family's loving care. We drove down to Athens with a new leash and some toys. Sara's family lived in the country, on a hilltop. Dottie, Asia, was obviously young and healthy, and very happy. She was mostly yellow, with a long slightly shaggy tail, more of a wide, hound type chest, and long legs. And those ears! Huge, and just like the photo, one was permanently straight up, the other bent. Light filled my heart just watching her run. Our four daughters got along beautifully. We felt terrible wrenching this dog away from the home where she'd been living and healing for three months. But after letting everyone play for a while, we did just that. Their older daughter had tears dripping down her face as we shut Asia safely into the back area of our car. When we got home, X immediately began preparing a care package for the girls, with dog toys for their other dogs, which is something that made me feel really proud of her.

After a period of adjustment, Asia Dot settled herself into our compact, sedate, and town-living life amazingly well. We are a quieter family than the one she came from; a sicker family. When summer slowly edged into fall and I became more ill instead of healthier, I did not, could not look for a new job. I spent so much time in bed, and by mid-fall, Asia would stay firmly beside me while I slept or shuddered in pain. She often wouldn't eat her breakfast until I was up for the day. Even though she had the most fun with John, and adored both girls, I was her mommy. If I was sick, she was there beside me. Three and a half years later, that is still true. Because none of us in the house get enough exercise, she has gained a little too much weight, but is otherwise healthy and happy and as perfect a therapy dog as if she'd been trained to do it. I'd wanted to bring my sad, transitioning family a bit of joy, and I did that, for sure. But I didn't know I would also be gaining another best friend, and a constant comfort. 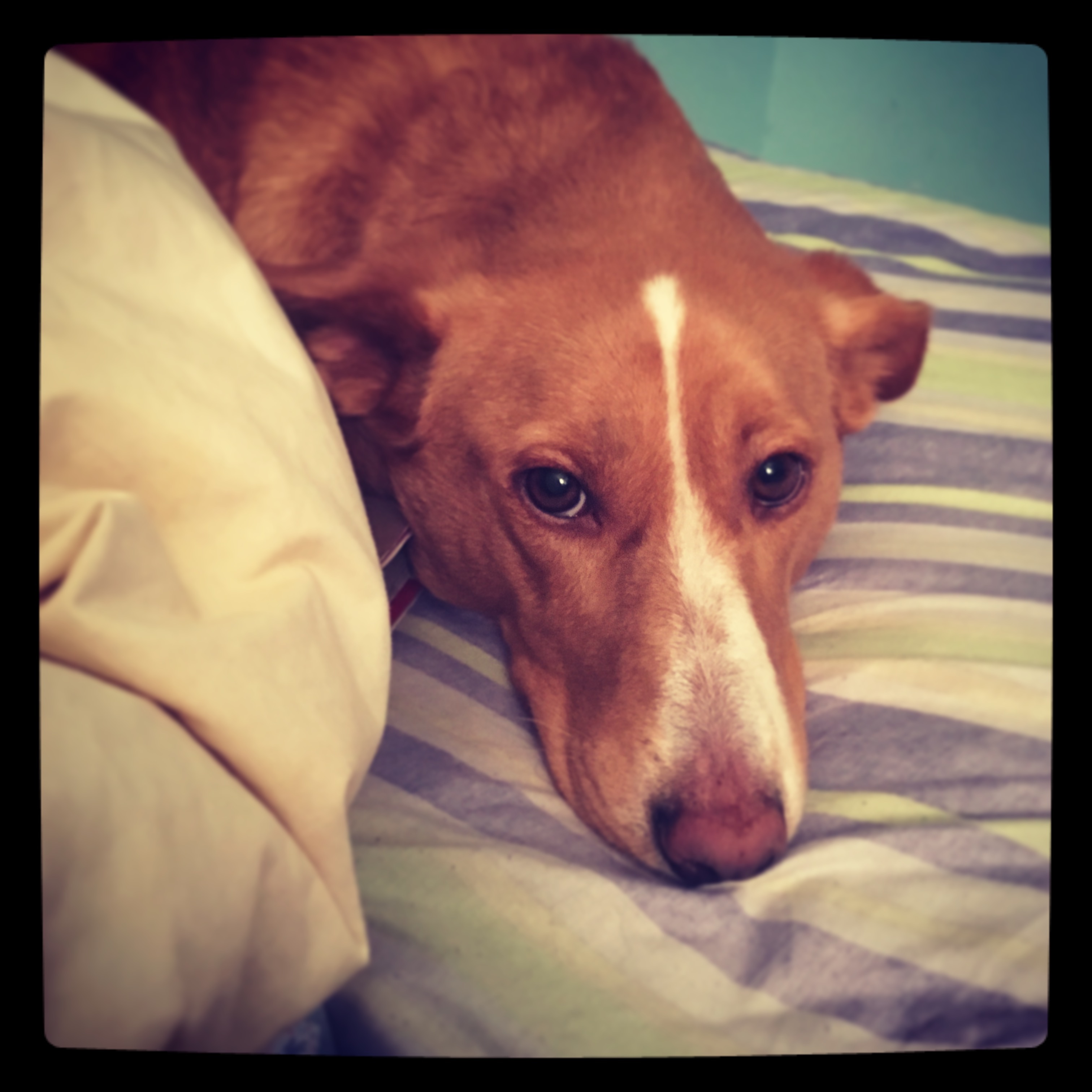 19 comments
This article represents the opinions, thoughts, and experiences of the author; none of this content has been paid for by any advertiser. The Migraine.com team does not recommend or endorse any products or treatments discussed herein. Learn more about how we maintain editorial integrity here.