In retrospect, scheduling a migraine study appointment two days before Christmas may not have been the smartest thing. I did have in mind that I wanted to get a new treatment before the holiday, especially since I suspected I received a placebo in November, but I hadn't really considered how many people would be out on the road. Despite this, I felt cheery, still enjoying my new-to-me Rav4, listening to music loud, until I spotted the flashing LED sign that said, not “Watch for stopped traffic” which would have been bad enough, but ROAD CLOSED. Fortunately there was a major exit before the lines of stopped cars I could see stretching far into the distance.

The quick glance away

I needed to get gas anyway, and wanted a car wash too, since my pretty chariot was fully encrusted with salt residue and mud. I pulled into a gas station and re-mapped my destination with a new route. It didn't look like I'd need to be off the interstate long. I sent H a text that I might be a little later than I'd anticipated while sitting inside the car wash, and pulled out into the busy suburban street, stopping behind a few cars at a red light. The light turned green. I eased off the brake and glanced down at my phone again to ascertain again how many blocks I had to go before the highway would re-open, and I could get back on it.

Then, a sudden jolt. The cars ahead of me hadn't moved at the green light, while I had eased forward and glanced away. But I had been going so slow! Maybe the other driver hadn't even felt it. But of course he had. His big black shiny car was in park, and he was getting out. Tears pricked my eyes and then flowed while I started shaking. My new car. The vanity and absurdity of the car wash now, when if I hadn't gotten one I might have missed the light altogether. I had never been in a car accident that was my fault and only one other minor fender bender where I had been rear-ended, and now this, just one month after getting this car I loved so much, and it wasn't even in my own name yet... except maybe that would work out okay... I got out and saw that my plastic bumper had a large, ugly crack in it and the shiny new vehicle I'd hit seemed to have a tiny, barely noticeable scratch... and temporary plates. My beautiful car. His beautiful car.

"All right now, it's all right, just... calm down, it's okay." The man, an older gentleman, seemed to be going into grandpa mode over my tears. "The cars in front of me... I was about to honk, they weren't moving.” He had a khaki ball cap that said “US Coast Guard” and a button on his blue polyester jacket that had a large red cross on a green background with the words “Jesus” and “Merry Christmas.” His eyes were kind. I was weeping and apologizing, asking him if he was hurt. He said “Let's pull over into this parking lot, and - we need to call the police, right?”

That was when I realized that not only had I caused damage on two vehicles, I could potentially get cited. It was nice that the man had so quickly pointed out that the cars in front of him hadn't moved. He seemed to be shifting blame away from me, irritated but not angry, and when we parked in the nearby lot and he called 911 and described our location I realized that he definitely was a kind man, a generous man. I sent John a text and he was immediately reassuring and comforting and emailed me his mom's insurance information. The man and I introduced ourselves. He told me with obvious regret and upset that his car was brand new, a Christmas gift to himself. It was a Chevy Equinox. It was in fact very lucky that I had a plastic bumper able to take most of the impact; there was very little visible damage on his car but of course it was new and any damage mattered. He told me his children were visiting for Christmas, and then, gesturing at my head, “I see you have – are you injured?” I realized with some horror that I had a Salonpas mentholated patch on the right side of my forehead for the mild migraine I hadn't completely gotten rid of before leaving the house. I had taken Imitrex, and what else? Prednisone (a steroid, which helps with migraine as well) and Amoxicillin for a sinus infection. Worst-case scenarios started fluttering through my mind.

Sharing I have migraine

"No, I – I get migraine headaches, and these patches help. It wasn't bad, I actually forgot I still had it on.” He seemed to accept this readily, which was a relief. Could they give me some sort of blood test and charge me with driving under the influence of Imitrex? I tried to remember if I had ever seen drowsiness warnings on the boxes or bottles. Sumatriptan tablets never make me at all compromised.

I gave Equinox Man my business card and forwarded him the insurance email. I apologized again and again. I was calming down but still couldn't believe that I had gotten a car wash so my car would look pretty and less than 5 minutes later I cracked its bumper. And involved another person, right before Christmas. As we were still standing there, the man said “Just remember... you know, it will never be this bad, and it will never be this good.” For some reason this vague wisdom struck me exactly right. I smiled. It was so true.

It took awhile for the police to come. It had seemed during the phone call like there was some confusion with jurisdiction, as we were right on the border between two townships. I sent H a text that now I would be really late and she said she could still see me today.

A police car pulled in to the parking lot. I had peeled off my patch and thrown it away. I glanced into my mirror and I looked fine. Clear headed, reasonable, regretful. At the last second I quickly applied some lip gloss, then I stepped out and met the officer, who was around my age, and Equinox Man, standing near the backs of our vehicles. We all shook hands. The officer began by apologizing for how long we had to wait for him, that it actually wasn't his jurisdiction but the other division was very busy and he'd just come to check things out. He asked if we'd exchanged information and we noted that we had, and E.M. even stated again “the cars in front of me didn't move.” He was trying to help me out, even though I'd clearly ruined his day and maybe his Christmas.

"Well, it looks like you are being real cordial,” the officer said genially, “and this kind of thing happens, there is a lot of traffic, last minute Christmas shopping, you know.” I was holding my license in my hand, but he wasn't asking for it, or running plates, or doing anything other than smiling affably. Almost like I felt I needed to be taken to task for something, I blurted out that I was on a detour and had actually glanced down at my phone to check the map, and was shocked at my foolish big mouth. But the officer chuckled. “Yeah, sure, I understand.”

He explained that the larger city police department needed the accident report, and Equinox Man volunteered to be the one to call them. We all said goodbye and Merry Christmas, with Equinox Man suggesting a good place for me to get back on the interstate, and we returned to our vehicles. I felt almost in shock, a different kind of shock, that within a difficult and unfortunate situation things were actually turning out unbelievably well. John sent a text that plastic bumpers for Rav4s only cost around $100 and he'd already contacted our friend who has a body shop. John's mom sent a text that she was just glad I was okay and to not worry about the car.

I had gone from horror that I had ruined my new car and could be arrested for something to driving away totally unscathed and only inconvenienced by a delay in my appointment and relatively inconsequential damage. I already was thinking that extra-strong duct tape would repair my bumper temporarily quite well. I breathed deeply. I turned on my music. I got back on the highway.

Arriving at the research clinic

When I arrived an hour later at the city where the clinic is located, there was more backed-up traffic, more than I'd ever seen there before. But I finally was able to pull into the tiny clinic parking lot, get out of the car, check my bumper again with a sigh, and walk inside. It was so very nice to see H after this long ordeal, and I gave her the gift of handmade earrings I had for her.

I hadn't realized it, but I was going to be getting three injections again at this appointment. Upon receiving them in my arm and both thighs, I immediately felt the change that I had missed last time: the slightly buzzy flow of my blood, the feeling of my brain lifting and re-settling. I also was going to be able to turn in my diary device, which inconvenienced us so much every morning with its loud alarm. H said that I would be without it for three months.

We made my new appointment and said goodbye, and then I was already on the road back home. I felt the medication working, and I felt triply lucky. Lucky to be involved in the study at all, to have not gotten a placebo today, and lucky that the mini car accident I'd been involved in had resulted in so little strife and stress. I felt very full of Christmas spirit, and decided that since I had Equinox Man's contact information, I would send him a card thanking him for how nice he'd been to me throughout an unfortunate situation, and how that kindness impacted not just me, but my family as well. I pondered again his strange but true adage: “It will never be this bad again... or this good.” Thank you, Equinox Man. 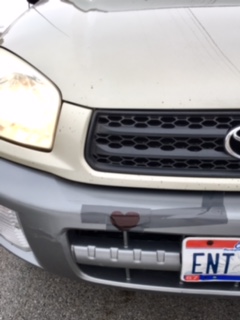