In the Fall of 1992, I believe, or maybe Spring 93, I took an Intermediate Poetry class with an instructor and poet named Tom Andrews. He was bald, soft-spoken. I think he must have encouraged me, after a number of missed classes and my explanation for those absences, to use my illness as muse; but then, I already had, in my fiction class and in my first poetry class. I felt the drive even then to make people understand the way these headaches had paralyzed me, left me shaking and bedridden and vomiting my entire life, when some people just took Tylenol for theirs. I was already using pain as art.

My first migraine poem was called "Sumatriptan" after the magical new drug whispered and passed between doctors and neurologists in hospital hallways like code. I was able to get my hands on this drug early, in tablet form, before it was accepted by the FDA, by driving the short distance to Canada. It was 1992. My first dose, a cylindrical wafer on the tongue, truly was a miracle, leaving me gasping in shock with tears streaming down my cheeks as every doom-spelling symptom vanished: the blind spots, the nausea, the weakness, the stabs of pain already emerging.

As my experience with Sumatriptan grew, so did the poems. It was soon approved by the FDA as an injection (I still remember the Glaxo Auto-injector kit), which my 19 year old self ridiculously refused to use at first. "You will use it," my mother snapped. And I did, and copying the numbered instructions down as another poem. "1. Remove Blue Cap From Syringe Case."

Tom Andrews liked me. He must have. He graded my portfolio glowingly, writing, "You will have to sign your first book for me." His own book of poetry, his second, came out in 1994, called The Hemophiliac's Motorcycle. He was one. Who raced dirt bikes. A section of the book was called "The Codeine Diaries." They were illness poems. He too had turned his pain into art.

I have been thinking about how I had access to that landmark medicine earlier than most Americans with migraine, having had a forward-thinking doctor, willing parents at $20 per pill, and the right geography. And now, just over 20 years later, having barely outlived Tom Andrews (he was only 40 when he died on a trip to England), I once again have access to a landmark migraine medication before most sufferers because of my participation in the CGRP studies. Tom Andrews' posthumous poetry collection is called Random Symmetries. It seems appropriate.

For almost a year, John and I worked on an online graphic novel project we called Migraine365. Almost every day we designed another new piece, making up a sort of comic book diary. One of the paintings he created to accompany a Sumatriptan poem for an art show we had at the coffee shop where we both worked is displayed online there too. Migraine art comes in many forms and styles, but is always powerful in its imagery. 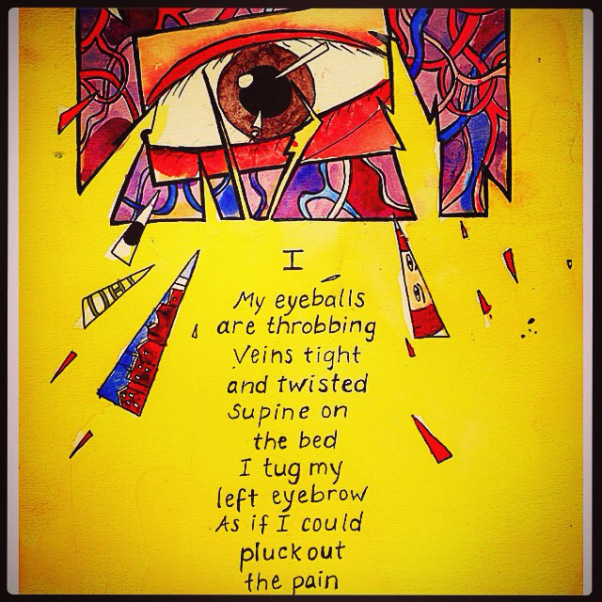 What is your favorite piece of migraine art? Have you ever created any yourself?

You never forget what it is like to have a migraine.

132 comments
This article represents the opinions, thoughts, and experiences of the author; none of this content has been paid for by any advertiser. The Migraine.com team does not recommend or endorse any products or treatments discussed herein. Learn more about how we maintain editorial integrity here.

Have you taken our Migraine In America Survey yet?