When I was 25, I got my fourth and fifth tattoos at the same time. The reason? I didn't want to have an even number of them. It just didn't feel right. My parents, who had been humoring me until that point, began to get a little alarmed. My dad wasn't happy at all and questioned whether I'd be able to find a mate in the future. I laughed and told him it was a good way to screen people. My mom, however, was thoughtfully pensive. She's always had a touch of clairvoyance where I'm concerned, and said “I think this is because you're in pain so often from migraine, and this is pain that you can control.” I thought she was probably right, and she was, at least partly.

My first directly migraine-related tattoo design was an idea that drifted through my head when I was hospitalized about five years later, detoxing from Excedrinoveruse (it was going to be too unpleasant for me to endure on my own). John and I had been married a year or two. Drifting in and out of sleep from the Benadryl, Phenergan and Nubain I was getting with the DHE I remembered the silhouette profile portrait done of me in kindergarten, and envisioned it on my arm with multicolored stars above it and a brain shaded with blue and green. A happy brain. 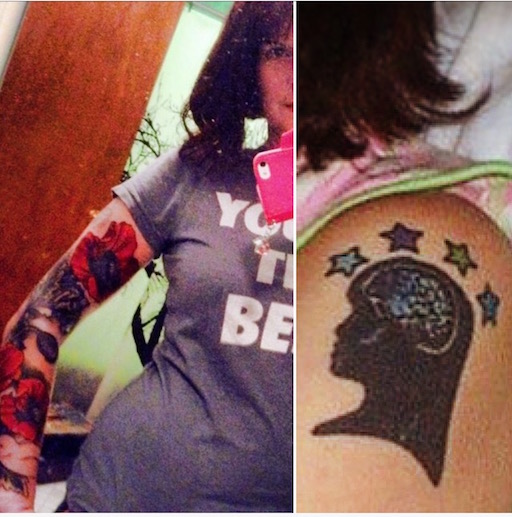 Now, I have a sleeve of poppies for pain relief, and a PET-scanned colorful migraine brain on the back of my neck with phoenix wings underneath it. My tattoos merge into one another and are no longer countable. While only two or three may be strictly related to migraine, the act of tattooing in itself is certainly connected to it, every time.

My friend Carmen Smith says that she had the words “Don't Panic” from The Hitchhiker's Guide To The Galaxy tattooed on her wrist when her migraines went chronic, as a reminder to herself. “I got cherry blossoms on my ribs too, to remind me that beauty always blossoms even if it takes a lot of work.” She wrote to me. “Every tattoo is different but I think they all relate somehow to migraine/chronic stuff because that is entwined with my life.” Some people with migraine choose to be more literal with tattoos relating to their illness. Hillary Fout sent me a photo of her shoulder tattoo with awareness ribbons worked into the floral design, one of which is purple and red for chronic migraine. 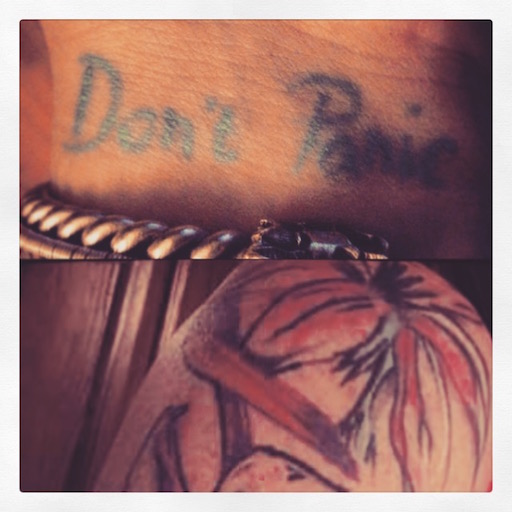 Last year I had a textbook image of a heart tattooed on my chest bisected with my own EKG line (procured from the CGRP study) and red-leafed vines instead of veins. Most recently, I chose an image from a children's book of little Princess Leia cutting hearts out of Daddy Darth Vader's cape. Next to it is the Carrie Fisher quote “Take your broken heart and make it into art.”

I believe the real reason I enjoy getting tattooed and pierced, besides that I love the appearance, is that yes, it is painful, and it is pain I'm controlling, asking for, paying for. And unlike the life-altering, inescapable pain of my migraine disease, this pain leaves behind a beautiful, visible mark. An artistic life map; a reminder of what I've been through. My tattoos make the invisible... visible. 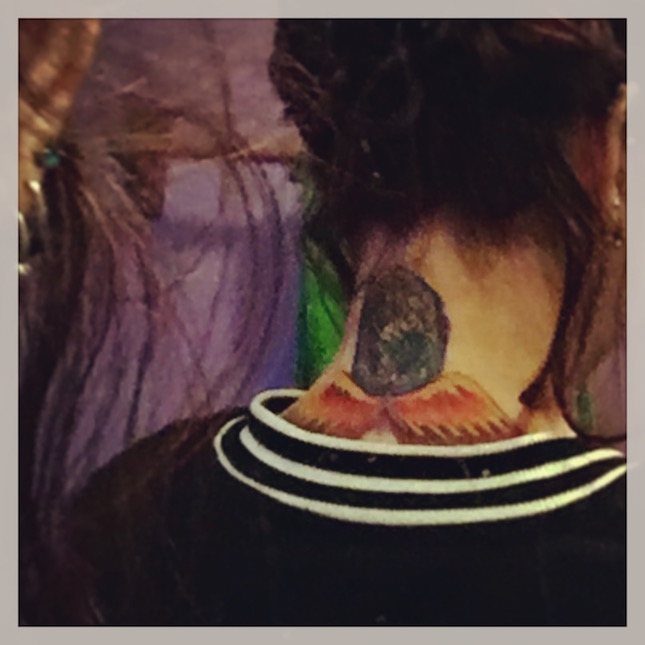 61 comments
This article represents the opinions, thoughts, and experiences of the author; none of this content has been paid for by any advertiser. The Migraine.com team does not recommend or endorse any products or treatments discussed herein. Learn more about how we maintain editorial integrity here.