My Experience with Zembrace, the 3 mg Sumatriptan Injection

I have written in the past about my current neurologist and how he likes to prescribe the newest available medications, which right now are newer forms of previously available medications. Last time it was Onzetra, the sumatriptan nasal powder. I didn't like it. This time I went ahead and accepted his offer of the 3 mg sumatriptan injection, Zembrace, mainly because I was in such a bad situation I could barely communicate and I ended up in the ER six hours later. The jury is kind of still out on the new injection.

Recently I have been using the generic 6 mg injection, and the pharmacy was unable to locate the auto injector device that was supposed to come with the cartridges, which each hold two syringes without plungers. I used all sorts of straight narrow implements instead. Q-tips, tweezers, hair pins. It was kind of a relief, because I always pretty much hated auto-injectors – too forceful and hard to control. But when I used the Zembrace sample I received at the office, admittedly already in horrible shape, it wasn't too bad. It was easy to use. Pull the red cap off, push it down onto the skin (thigh or upper arm for subcutaneous injection) and the needle disengages and injects. The pain of the injection isn't too bad. Nothing like the Sumavel DosePro air injection, which I absolutely hated. The needle retracts on its own so you don't have to pull it out, and it is deep within the auto-injector pen. Put the red cap back on and it's done.

Simple and easy, and made me realize that I hadn't been enjoying my do-it-yourself injection set up as much as I'd thought. I knew the first time I used it I was already too far gone, but I did get some fast lowering of my pain level. With the other medications I had on-hand, I was able to go to the ER for fluids my hospital cocktail and finish recovering at home. My biggest fear regarding my own health is that I will reach a high pain level and never be able to break it, and I had been at that panicky point twice that month already. It was a relief to succumb to the ER knowing ahead of time that I would be able to break the migraine, with their help. And I did.

Working it in with other medicine

My Disability Medicare did not cover the Zembrace. My pharmacy had to special order it, and when it arrived I used the coupon that guaranteed that 4 injections would cost only $25.00. I was told I was allowed 8 per month. Which is good, because even though the medicine works fast, 3 mg is often not enough to completely break the type of migraine I would be using an injection for. At lower pain levels, I would prefer to take tablets. So eventually it may seem like going back to the generic sumatriptan injection at the higher mg is the best bet.

In other news, I had a severe migraine at the end of last week and even though it had been exactly a month since my last ER visit (the one mentioned above) and I had expected to have to go, I was able to break it at home. I lost three days and used all four of the Zembrace injections I had over 48 hours, but I consider that a success. Small victories! 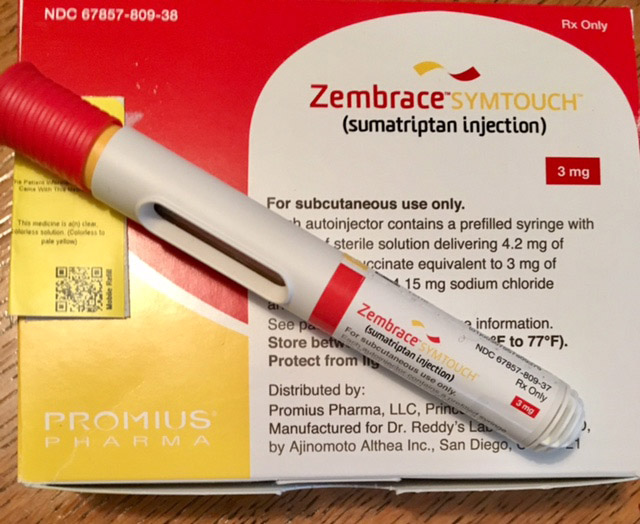 Medical PTSD: My Experience with a New Doctor

47 comments
This article represents the opinions, thoughts, and experiences of the author; none of this content has been paid for by any advertiser. The Migraine.com team does not recommend or endorse any products or treatments discussed herein. Learn more about how we maintain editorial integrity here.