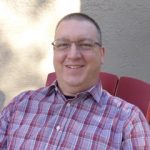 In September of 2012, I was hit with an awful migraine attack. It lasted for a month and it was unrelenting.

I fell asleep with the help of medication, but the migraine was still there. I would wake up with the migraine too. I bounced from medication to medication and from doctor to doctor trying to find something to help the pain and side effects of migraine.

During my third week of the attack, the combinations of medications were starting to give me some short term relief, but I was happy to get it even if it was short-lived. What I didn’t realize at the time, was that my dog, Sam, would begin to play an ever-increasing part of my relief therapy.

Puppy with a purpose

He was a new puppy for us at that time. We had another dog at the time and while she was glad to have a playmate, that was not going to be his purpose in the family dynamic.

He loved to play, but I was his main concern. Looking back now and after reading about therapy animals I am able to see that he was becoming my therapy dog.

Learning from each other

He was not sent to any training school nor was he trained to be my therapy dog. He just became my little migraine buddy. As time went on he was becoming more in tune with my migraine attack cycles.

At first, my migraines were episodic, but over the years they became chronic. Sam somehow knew when I was going to get an attack, and I was learning from his behavior that he knew something was wrong with me.

Sam would follow me everywhere when I was home if I had a migraine, and he even persisted as long as I was experiencing migraine symptoms. He would push his body against my legs and look up at me as if to say “I’m here to help you”.

I would spend a fair amount of time during attacks in bed. Sam wasn’t allowed on the bed so he would lay on the floor by my side of the bed. If I held out my hand he would be right there to give me a reassuring lick to let me know he was there by my side.

I never had a lap dog until Sam started hanging out with me when I would spend time on the couch with an ice pack on my head. He would keep his eyes on me the whole time, and just keeping my hands on him made me feel better. The attacks seemed less severe when I was with Sam.

He would be my protector as well. He would stand to attention and give a bark or two if I was approached by someone as if to tell them to back off.

I’ve read that about 50 to 60 percent of dogs act as a therapy animal with no training at all, but there are also dogs that are specially trained to alert their owners of a pending migraine attack.

Since I suffer from chronic, intractable migraine Sam is my comforter and little migraine buddy. He just makes me feel better and I am blessed to have him by my side.