The couch is my best friend along with my cats and long suffering boyfriend. My second best friend, is what I call "the blue thing". Its a icepack that you can velcro around your head, and I usually reach for it most mornings, before coffee even. These unusual best friends have been acquired from my 25 years of suffering with severe and chronic migraines. 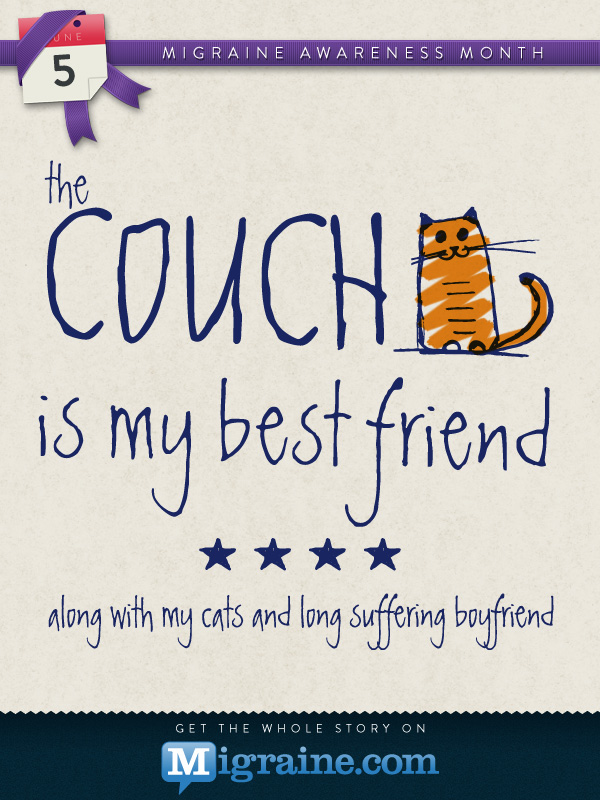 When I was younger, I used to get headaches. I would take Excedrin and go about my day like the rest of the world. Then at age 26, I was rear ended by a guy doing about 40 MPH, and got a bad headache instantly. Three weeks later, I suddenly lost the center column of my vision, heard this awful buzzing sound and then began to experience the worst pain I had ever felt. I was diagnosed with chronic migraine with aura and have all the lovely accompanying problems; namely vertigo, nausea, sensitivity to light, sound, smells, etc. My migraines also are intractable, which means THEY DON'T GO AWAY!! I can take a dump truck full of medication to little to no avail. Like an unwanted houseguest, they stay all day, all night, and into the next day, or days.

I think my record is 11 days. I have been hospitalized for days on end, three separate times, and frequently have to go to the ER. If they issued me a frequent flier card, I would be a world traveler on their dime. The pain from these migraines are so bad I have banged my head on the siderails and begged for death. Migraines are silent sneaky bloodsuckers, sucking up up more than their fair share of jobs, friends, family members, boyfriends, and my fun time. I remember one gorgeous sunny day, I was blue sky happy, brushing my horse till he gleamed. I proudly saddled him up, put my foot in the stirrup then; bam - I got a migraine so bad I nearly fell over. I took off the saddle and bridle and just chucked it in the corner, threw the horse back in the field, and drove with one eye to the ER. Anyone watching me would have thought I was nuts, wondering what the in hell had just happened. As a singer fronting rock bands, I used to tie a little bag of medication around my mic stand, so I could dose myself between songs if an attack hit, without leaving the stage. My lifelong motto was "Forge Full Speed Ahead" . Migraines were not going to stop me from doing what I wanted to do. I would take fistfuls of various medications I called a "molotov cocktail" just to knock back the pain and get out the door and be like everybody else.

After a decade or so of this behavior, I hit a depressive period, and gave in to the pain and misery for a couple years, wallowing in self pity and bitter sadness; migraines like bankrobbers stole everything from me, and I tallied and obsessed over every crime. Now that I am older and have tempered somewhat, I have reached the acceptance stage and I don't fight it anymore. I made friends with the couch and my blue thing. I still hate to cancel plans and agonize over it for hours, but I try not to let it consume me. I figure everybody has some cross to bear, and I guess this is mine. My next life, however, I plan on not having a head, so there absolutely no way I can get a migraine. I'll be a cloud that only rains on the people that were jerks and said stupid things to be like "You called out because of a headache?" or "I just take an aspirin when I get a headache, and that works for me". Yeah, that sounds good, a big black cloud that rains hail stones, size large.

How my chronic migraines ruined my life