My Story, but Also a Little Advice 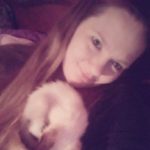 I started getting migraine headaches when I was 13. I was a cheerleader and they seemed to happen after every game. They stopped after I stopped being a cheerleader so I never gave it another thought. When I was 23 and pregnant with my second daughter they came back with a vengeance and never went away. I would lose consciousness, wouldn’t be able to speak. Nothing helped at all. And it never went away. I had 3 girls and attempted college while trying to endure migraines and neuralgia that were determined to make me look like a moron 4 or 5 times a week if not every single day. But on November 14, 2009, everything changed. After taking my girls to the doctor, this world crashed down around me. I had the worst migraine ever for about 3 days. But I thought nothing of. Turns out, for some unknown reason I had a carotid artery aneurysm. The clot moved to my cerebellum and caused a stroke. I was only 32. Even worse, my 3 very young daughters saw the whole thing. Nobody to this day knows how I lived through this. No doctor can explain. They just tell me that I’m a miracle. None of the neurologists from other hospitals believed the Dr’s. So they had to come see me for themselves. This is such a horrible time for me. It’s so bad. Looking at me you would never know it happened.I’ve completely recovered except for the traumatic memories that people think I shouldn’t have. It’s hard because it all comes back. As you can imagine when your brain tries to explode it does leave you with a great deal of pain, but I try not to complain much, because it’s better than being dead really. I’m here with my daughters. Mostly, I’m sharing this because as migraine sufferers we are at risk of CVA. So if you do have a migraine that lasts longer than usual or hurts a lot more than usual don’t just ignore it. It may be nothing, but it might be something like this.