Or, "triggers creeping out of the woodwork."

I love beer. I don't tend to over-indulge, but boy, oh boy, do I enjoy sitting on my screened-in porch on a warm day and slowly slugging back a cold one. I relish the thought of being at my family reunions, a fancy keg of microbrewed beer only paces away from where we sit in the gazebo - I walk over and have just half a pint more before bed.

I cut down on my beer consumption

Now, as I write, I feel I must acknowledge that this past summer, I didn't let myself have much of this beer, even on nights when we drank more than one. I'd have a little bit of the hoppy microbrew and then switch to something less fancy and lighter, like Yeungling or, God forbid, Bud Light. I felt not-so-well if I had more than one heavy beer, and my sister, who'd once been a migraineur herself, felt the same way. Hmm... 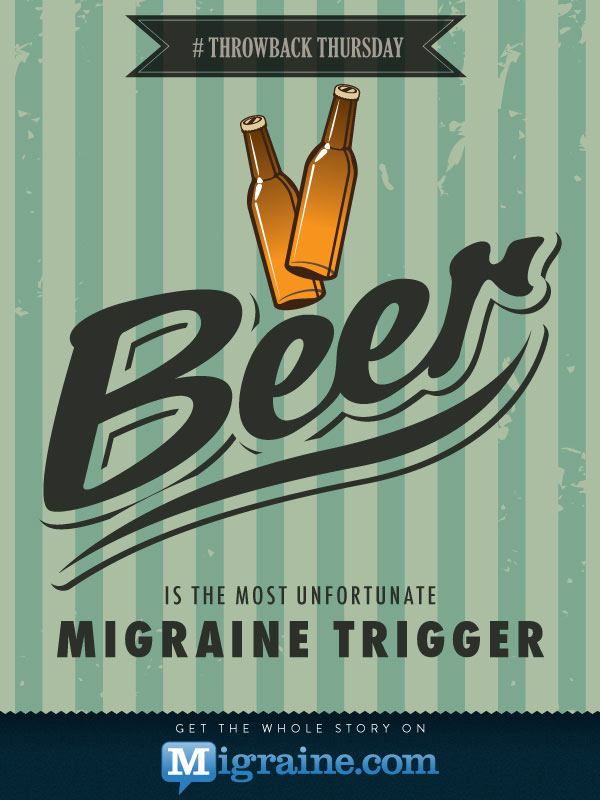 Beer has become a migraine trigger

But something's been happening in the last couple of months, something new and utterly unwelcome: Beer has become a harsh migraine trigger. At first, I only noticed this if I imbibed a couple too many on a weekend night and woke up the next morning with a migraine. I told myself that I deserved this, knowing all the while that no one ever deserves migraine headache pain. But then it started to happen when I only had a couple and was far from getting that hazy beer buzz.

I had to test the waters

Earlier this week, I ventured out of my self-imposed beer hiatus. I tried to see if maybe this beer trigger was a fabrication, that maybe there were other triggers in the environment I had been unaware of at the time of those migraine episodes. I had a couple of light beers at my friends' house while staying there overnight on Tuesday. Everything was fine. Whew.

One drink was fine

On Wednesday, I had one - just one while at another couple's house for dinner - a Corona with lime this time. Not my favorite, but I figured it was safe. Still all clear. Thank goodness.

Three lead to an attack

Last night I had three free beers at an opening downtown and was sick with migraine by midnight. (I had paced myself ever-so-slowly, having one at 6:30-ish, one at 7, and one at 8:30.) Was it the fact that this beer was stronger in flavor and ingredients? (It was a locally-made pale ale, not a light beer as I had had earlier that week.)

Is all alcohol a trigger?

Is it possible that certain types of beers are okay?

I once read online that a well-respected neurologist believes that most migraine triggers can be traced back to food and drink intake. When people name alcohol as a trigger, he doesn't think all alcohol needs to be cut. Apparently, some clear alcohols such as vodka are safe for some.

I don't know if I want to experiment much more, at least for the time being, but if anyone has any feedback they'd be interested in posting, I'm all ears.

Thankful to be feeling up to par again, hours later,
me...

Possible Histamine Response: Is This Related to My Migraine Disease?

What's the first thing you plan to do when your migraine goes away?

29 comments
This article represents the opinions, thoughts, and experiences of the author; none of this content has been paid for by any advertiser. The Migraine.com team does not recommend or endorse any products or treatments discussed herein. Learn more about how we maintain editorial integrity here.