Looking for Midrin Equivalents for Your Migraines?

Editorial update: Per an FDA update in June 2018, manufacturers and labelers ended the distribution of unapproved isometheptene-containing drugs, including Midrin. For a complete list of the drugs that are unapproved with this product, click here.

For many years, people with migraine have turned to Midrin as their Migraine abortive medication. Midrin is a compound of three ingredients: isometheptene mucate, dichloralphenazone, and acetaminophen. The isometheptene mucate helps reverse the vasodilation that sometimes occurs during a Migraine. Dichloralphenazone is a sedative. Acetaminophen is a simple analgesic.

Over the years, other medications with the exact same ingredients have been sold under other names including Amidrine, Duradin, Epidrin, Isocom, Midchlor, Midchlor, Migratine, and others. The medication has also been available with no brand name, simply labeled isometheptene mucate / dichloralphenazone / acetaminophen. It’s a bit confusing, but none of these were actually “generic” versions of Midrin. 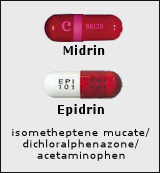 For a few years now, Midrin has been unavailable at times because of manufacturing problems. Recently, Midrin and all of the other equivalent products have disappeared from pharmacies. Midrin and some of the “brands” have been discontinued permanently. Others show as being back ordered when pharmacies attempt to order them.

Here’s a response I received on December 13, 2010, after I contacted the FDA about this issue:

Thank you for writing to the Division of Drug Information in the FDA's Center for Drug Evaluation and Research.

Midrin is not FDA approved, but is on the Drug Efficacy Study Implementation (DESI) list. Since there is no approved application for Midrin, there are no approved generics for this product either. The products you are referring to are not generics, but rather other products that contain the same ingredients as Midrin.

The following is a brief general history, relevant to Midrin:

In 1962, Congress amended the 1938 Food, Drug and Cosmetic Act to give the FDA the authority to regulate medicines on the basis of efficacy in addition to safety. That is, the amendment required manufacturers to show that their drug products were effective, as well as meeting the requirement of the earlier Act, that the products must be safe. As a result of the 1962 amendment, all the drugs approved under New Drug Applications (NDAs) between 1938 and 1962 had to be reviewed again for efficacy. Furthermore, for every drug initially sold between 1938 and 1962 with approval by FDA, five others were sold without FDA approval. Many of these drugs were chemically identical copies of previously approved drugs, and hence were known as "me-too" drugs. Many others were combinations of approved ingredients. FDA decided that the efficacy study, to be fair and to accomplish its purpose of improving therapeutics in the United States, had to apply as well to these non approved drugs. Because the resources of the FDA were too limited to do this, the agency asked the National Academy of Sciences/National Research Council (NAS/NRC) to assist in the review effort. The NAS/NRC chose 30 panels, each composed of six experts, to conduct the review of various categories of drugs. The manufacturers of drugs with NDAs that had been submitted between 1938 and 1962 were asked to submit to the FDA their evidence that the drug was effective. The NAS/NRC panels then reviewed the data. In late 1967, the panels began submitting their reports to the FDA. The FDA formed a task force to implement the recommendations in the reports. This was the Drug Efficacy Study Implementation (DESI) task force. DESI products can continue to be marketed until a final determination is made.

When I replied, expressing my concern for the many Migraineurs for whom Midrin and its equivalents are the only abortive medications they can use, I received this reply:

We understand your concerns. However, in order to keep Midrin on the market, a company will need to submit a new drug application to FDA, and FDA will subsequently have to approve the application. FDA has serious concerns that drugs marketed without required FDA approval may not meet modern standards for safety, effectiveness, quality, and labeling. The FDA drug approval process provides a review of product-specific information that is critical to ensuring the safety and efficacy of a finished drug product. For instance, the applicant must demonstrate that its manufacturing processes can reliably produce drug products of expected identity, strength, quality, and purity. Furthermore, FDA's review of the applicant's labeling ensures that health care professionals and patients have the information necessary to understand a drug product's risks and its safe and effective use.

After this exchange with the FDA, I set out to discover if any of the pharmaceutical companies were planning to apply for FDA approval and continue manufacturing their medication. I have found only one company working on it — Excellium Pharmaceuticals, the maker of Epidrin.

On Friday, January 28, I spoke with an official at Excellium regarding the status of Epidrin. They have been working with the FDA and have asked the FDA to enter into an agreement with them to allow them to resume shipping Epidrin based on the safety and efficacy data they have collected to date and the track record of these medications over the years. If they can reach such an agreement with the FDA, shipping of Epidrin could resume shortly. If, however, such an agreement cannot be reached, they would have to conduct clinical trials and file a new drug application (NDA) for FDA approval of Epidrin. This would take a minimum of two years, during which they could not manufacture or ship Epidrin.

Excellium expects to know the outcome of their discussions with the FDA by the end of this week.

You can read the latest update on Midrin here: Midrin-October 2011 Update

How Are CGRP Drugs Similar and Different?

11 comments
This article represents the opinions, thoughts, and experiences of the author; none of this content has been paid for by any advertiser. The Migraine.com team does not recommend or endorse any products or treatments discussed herein. Learn more about how we maintain editorial integrity here.