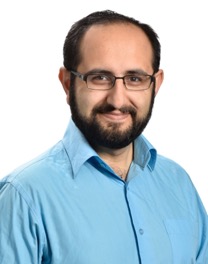 Khalid is a Moderator and Content Contributor for Migraine.com. At the age of 12, Khalid started experiencing severe headaches which were accompanied by nausea, photosensitivity, and auras. Doctors initially dismissed his symptoms as “growing pains,” but eventually a Neurologist would formally diagnose him with migraine. The medications affected his schoolwork and concentration, and after falling asleep during an algebra exam he decided to come off his meds (he loves math!).

Over the years Khalid’s acute migraines became chronic, until he was experiencing episodes at least 3-5 times a week. After trying to naturally manage his migraines for almost two decades, Khalid decided lifestyle changes alone were not enough. He’s now working to find the right medication and dosage for his migraines.

In addition to managing migraine, Khalid works full-time as a Process and Product Development Scientist in the Biotech industry and has a PhD in Food Material Science. He and his wife, a fellow moderator, also run a part-time woodworking business creating tables, wall clocks, and other handcrafted items. In his spare time Khalid likes to play chess and experiment with new wood techniques in the garage. He loves camping with his family, Afghani BBQs at the park, and watching news bloopers on Youtube.

Click here to see all of Khalid's articles on Migraine.com.