The Cefaly has received FDA approval for marketing in the U.S. and early research shows promise, but what's it really like and does it work? Here’s my review after six months of use. The gist? Cefaly is worth a try as long as it’s in your budget.

Who shouldn't use Cefaly?

I think it is best suited to migraineurs who don’t have significant allodynia and either:

Made for episodic migraine

Keep in mind that this review is from the perspective of a chronic migraineur who was never without a migraine at the time of testing. Cefaly is intended for people with episodic migraine who have between two and eight migraine attacks a month. A company representative told me in a personal email that it is best as a preventive if not used during a migraine attack, which, of course, wasn't an option for me.

The manufacturers of Cefaly did not give me a free device for testing and are not compensating me in any way for writing about it. I purchased my device from Canada in June 2013 at the recommendation of my doctor.

How do you use the device?

Using Cefaly is as simple as sticking the electrode to your forehead, sliding the device on it and pressing the button. The version available in the U.S. only has one program, the prevention program. Units sold outside the U.S. have three different 20-minute programs: one to stop migraine attacks in process, the second for migraine prevention, and the third for stress reduction. 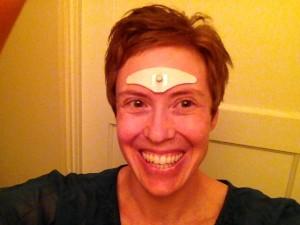 How often can you use it?

The FDA also says that Cefaly should not be used for more than 20 minutes a day, although the Canadian manual says, “Cefaly can be used all day long if needed.” When setting the treatment time, the leader researcher of the first published clinical trial said, "We considered what may be effective and what would be considered convenient for adherence to treatment. More time might produce better results, but it might also result in lower compliance. Twenty minutes was a compromise."

I used it on the most intense program for about an hour a day. This is longer than the 20 minutes per day that the FDA has approved, but within my headache specialist’s recommendation and the guidance of the Canadian manual.

For me, the sensation starts off feeling like a mild buzzing vibration that’s slightly sharp, but not quite like pins and needles. As the program intensifies, the vibration strengthens and a feeling of pressure develops, like someone is pushing the heel of their hand hard into my forehead. Next, is a clenching sensation like my muscles are tightening. As I adjusted to the device over a few weeks of daily use, the intensity of all these sensations decreased until it was not bothersome at all. However, at least a half dozen times after that adjustment period, even the lowest setting was too painful for me to tolerate. I could never predict when this would happen, it appeared to be random.

The manual, the FDA’s press release, and researchers who have been interviewed say the sensation is not painful; it may be unusual and unexpected, but not painful. In the large patient satisfaction study, fewer than 5% of all participants reported any issues with the device, though pain or unbearable discomfort at the electrode site was the most common complaint. 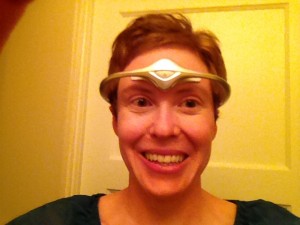 Empirically, the numbers indicate it shouldn’t be painful. The dozen real-life migraineurs I know of who have tried it describe the sensation as either bearably uncomfortable or too painful to use. This could have to do with the degree of allodynia a person has and I suspect that anyone with significant sensitivity to touch will find the Cefaly to be unbearable.

Because I have a migraine every day, I used it at the highest setting to both abort migraine attacks and for prevention. When I first started using it, I got immediate relief for three hours after taking it off. Over six months, that relief slowly diminished until it was completely ineffective. It did not prevent any migraine attacks for me and when I stopped using it, there was no increase in my migraine, frequency, severity or duration.

After I posted that information on my own blog, a company representative contacted me to say that I should use it on the preventive setting, not the acute setting. This will not be an issue for anyone who purchases it in the U.S. because only the preventive program is included.

Cefaly's operation is generally quiet, but relies on loud, obnoxious beeps to let you know that you’ve turned it on or paused its intensity. When it stops working out of the blue, which it does if you bump it slightly or lean forward for very long, it plays a super-annoying multi-chimed tone. This happens way more frequently than you’d expect it to. Not exactly the best design for a product intended for migraineurs.

How should you care for the electrodes?

Replacement electrodes are a recurring expense and, with shipping, average out to $10 each. Each one is intended to last for 20 uses. By storing mine in a zip-top bag along with an alcohol-saturated cotton ball, I could get them to last about 30 uses, though they were less conductive the more I used them. Using electrodes beyond their expected life span did not increase the frequency that the device broke connection with the electrode.

Wiping your forehead with alcohol before applying the electrode can help prolong the life of electrodes. With daily use, this can cause your skin to dry out. To combat that, I often used Cefaly immediately after washing my face and skipped the alcohol.

What batteries does it use?

Cefaly takes two AAA batteries. Using it an hour a day, I went through a set of batteries every 10 days or so. Cefaly's U.S. website says that batteries should need to be replaced once a month if the device is used for 20 minutes every day.

How much does the device cost?

You can purchase a Cefaly at www.cefaly.us (be sure to use the .us address, Cefaly.com is not accepting U.S. orders at this time). The cost is $295 for the device (plus $29 shipping), which includes one electrode. A set of three replacement electrodes (about two months of use) cost $25 and an additional $5 for shipping.

Cefaly units with three program levels are for sale in Canada, Australia and Europe and you don't need a prescription. Non-U.S. distributors are not supposed to ship devices to the U.S. As of April, 25, 2014, some readers have reported that Canadian distributors are still shipping to the U.S., but some of those devices have been held up in customs.

My overall review of Cefaly

Cefaly is unlikely to be the slam-dunk treatment we'd all love to have, but it could be a powerful tool in your migraine toolbox. Trying it is the only way to find out if you can stand the sensation and if it will be effective for you. There's enough chance that it could help, either as preventive or abortive treatment, that I think it's worth a try if it's in your budget.

If you've tried Cefaly, please share your experience with us and let us know how frequent your migraines are. Does it work for you? What does it feel like to you and it is painful? Do you use it to prevent migraine attacks or stop them once they've started? Any other tips or suggestions?

What's an Elimination Diet and How Do I Manage One?