In early June 2014, I was sitting with my mom in my headache specialist's office, nervously wringing my hands while speaking to the headache nurse coordinator. I rarely got to see the specialist herself. The nurse – I'll call her Connie – calmly took notes and gazed into her computer screen as I described my recently experienced Worst Headache Ever. She said, “Now you say when you went to the hospital the first time, you were put on oxygen?” I nodded. "How did it affect you?" I told her I had felt calmer afterward. “Were you having symptoms that aligned more with a cluster headache than a migraine?”

I responded that I didn't think so other than the unbelievable severity of the pain. It had been just as long in duration, I hadn't had several attacks over a short time period, I didn't have an eye that had watered. What I did have was the worst pain I'd ever experienced and an inability to lie down and be still, which is more common for cluster sufferers than for someone with a migraine. I'd had to pace, rock, "take the beast for a walk", as those with cluster headaches tend to describe their need to move during an attack.

Well, regardless, maybe using oxygen at home is something that could benefit you.” Connie said, and tapped on her keyboard. Sheets began ejecting from the printer. “8 to 9 liters per minute,” she explained, and handed me the prescription and several pages of information. She then outlined the new treatment plan which would be to first take an additional dose of my daily magnesium supplement and use 20 minutes of oxygen, then if pain still persisted, use a Sumatriptan injection (not a tablet). Using oral Sumatriptan was supposed to be a last resort. If those didn't work or I got into a situation where pain continued to recur, I was to call their office and schedule IV infusions of DHE.

Trying it on for size

I was doubtful, but intrigued by the oxygen idea. John and I took the written prescription to a medical supply office the next day, and learned some of the vocabulary involved, most notably that the mask type is non-rebreather and that a large machine called a concentrator or regulator would also be required, as well as lengths of tubing and various other tools. I received several cylinders (tanks) of oxygen in a silver cart with wheels. When we were all together that evening, John and I showed the girls the oxygen mask and talked about what it was for, and I put it on for them so that it wouldn't seem scary, and let them try it on too. 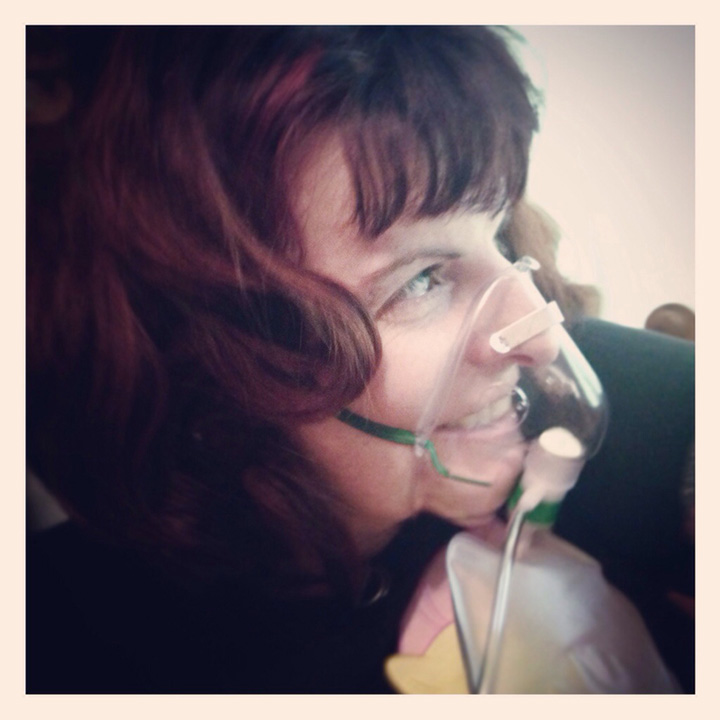 Trying on the mask for my daughters, so they could get used to it.[/caption]

A brief history of oxygen treatment for cluster headache

According to the National Headache Foundation, oxygen treatment for headaches was first studied in 1939 when Mr. Charles Rhein of Linde Air Products reported to Dr. Francisco Alvarez at the Mayo Clinic that he had successfully treated severe headache patients with pure oxygen. In 1940 Dr. Alvarez released his own study of 100 patients with “migrainous” headaches who were treated with 100 percent oxygen through a nasal type mask and a flow of six to eight liters per minute, in which 80 percent of those were reported to be completely or significantly relieved. However, in the thirties and forties studies were much less rigorous, and there was nothing to distinguish migraine from cluster headaches. Recent work has been done almost exclusively on the effect of oxygen inhalation on cluster headaches, most significantly with Dr. Lee Kudrow, who found that 75 percent of the cluster headache patients he studied had their pain relieved by inhalation of oxygen, with increased success the earlier in the attack it is used.

As far as migraines, research is scarce. I did find a rather unhelpful collection of studies from 2008 originally published in the international journal The Cochrane Library, which evaluates research in all aspects of health care. Those studies only examined the effects of hyperbaric oxygen therapy on migraine, which would require a special chamber; normobaric therapy (the type we are discussing here) was only studied on cluster headaches. Obviously, hyperbaric chambers are not going to be available to most people.

Kerrie Smyres, another Migraine.com advocate, was able to send me a journal article she'd located when researching oxygen for migraine, from Cephalalgia in 2012. In this article, authors Jürgens, Schulte and May discuss a patient with typical migraine (no aura) and autonomic symptoms (runny nose, drooping and watering eye) who had mistakenly been diagnosed with cluster headache. She did receive relief from oxygen use; however, her pain would return after thirty minutes. The authors wondered about this "success" and the connection, perhaps, with her autonomic symptoms. Cluster headache sufferers often have these same symptoms. The authors conclude that there is clinically significant evidence that oxygen inhalation is more effective in migraine with cranial autonomic symptoms than that without, but that only cluster headaches seem to be completely relieved by oxygen therapy.

The downside of oxygen masks

As for me, whenever I felt a migraine coming on I would dutifully go take another dose of magnesium and go up to the bedroom, recline against pillows, put on the mask and turn on the oxygen. (And of course this was only possible due to the fact that I'd recently had to stop working.) The mask sometimes bugged me, putting pressure on my sensitive nose and leaving indents on my cheeks. I would struggle to relax, and breathe somewhere between deeply and normally while the big machine I'd been given vibrated noisily. The oxygen coming through the mask didn't taste odd like I'd feared it might. However, only once or twice out of six months of use I was able to get up after the oxygen session and not need to take medication for the migraine that continued to progress.

I kept at it anyway, even bringing the machine and a small cylinder on vacation with me, but the honest truth is that it just didn't work to abort a migraine or decrease pain. For a while I even tried using it daily as a prophylactic measure, but I stayed as chronic as ever. I believe it was probably somewhat beneficial in that it caused me to take a break, retreat, and breathe deeply, which would be a good idea for anyone at any time, really, but particularly when a migraine is coming on. Twenty minutes of relaxation while practicing some mindfulness or biofeedback is literally just what the doctor ordered, or what my pain psychologist ordered, anyway. However, the oxygen itself was probably superfluous.

Asking your doctor about oxygen therapy

In conclusion, it's quite clear that oxygen inhalation is a very effective therapy for treating cluster headaches, but there is much less evidence to support its use for migraine. Dr. George Sands from the Beth Israel Medical Center in New York City states on the National Headache Foundation website that he sees some relief with oxygen inhalation in about half of his migraine patients. Side effects are rare, though Dr. Kudrow reported 25 percent of his cluster patients had rebound clusters after oxygen use. (I'm sorry, but really? What doesn't cause rebound headaches?) Oxygen is not a commonly used treatment for migraine and it may be difficult to overcome the initial resistance from one's doctor or insurance company; however it is also a natural, rather risk-free therapy without many of the worries most of us have when trying a new medication. I myself ended up retiring my oxygen inhalation accessories and returning my machine with the empty tanks by the end of that year. Would oxygen provide some relief for you? I have no idea, but there's no harm in talking to your doctor if you feel it might be worth a try.