The Editorial Team at Migraine.com is highlighting people in the migraine and headache disorder community in a series of interviews. We talked to Laura about living with migraine with aura in addition to restless leg syndrome (RLS). 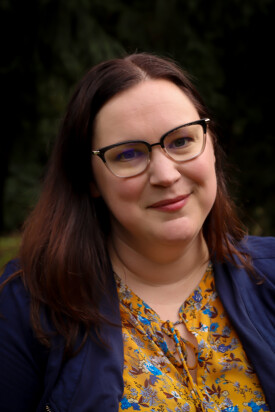 I got my first migraine in 7th grade, complete with aura and all the bells and whistles. My mom thought I might be having a stroke but was somehow able to figure out I had a migraine in the age before WebMD. I always had numbness with the migraines and was bad at taking pills.

How my migraine evolved in adulthood

It wasn't until I was an adult and still getting migraines that I was able to get dissolvable medication and eventually the shot and a nose spray, neither of which I ever used because my migraines took a long break while I was pregnant with my first kid. I started getting less intense migraines during my second pregnancy and still sometimes get an aura that I can usually fend off with a strong chug of black coffee.

Managing attacks with and without aura

Sometimes I get a migraine without aura but since I didn't get the warning aura, I usually miss the signs until it's too late and need to medicate and manage the headache after the onset.

The impact of debilitating aura

The aura is the most debilitating part because it makes it so I cannot drive. I've gotten two auras while driving and once when I was almost home. The other was on the way to my graduate school graduation, so I pulled over and had my mom drive the rest of the way. That was not a fun graduation ceremony. My kids have missed preschool because of an aura. I can power through the headache and other symptoms, but not being able to see is the scariest part.

Step-by-step through an attack

First, I get spacey. I almost never catch the migraine attack at this stage. Next, I get the aura which usually looks like a visual imprint from looking at the sun. Then the numbness and tingling set in, usually only on one side. The headache and nausea come later and lock me in place for however long it takes to subside. I sleep hard and wake up feeling hungover. It hurts to look at screens or be around lots of movement or loud noises for at least a day.

Both RLS and migraine are worse with tiredness, so the most important thing I need to manage is my sleep. I also have anxiety and PTSD, so I often have fits of insomnia and take an SSRI that may make the RLS worse. To "reset" my sleep, I sometimes have to say no to socializing and/or take medication to help me get a deep sleep one night every few weeks. If I'm very tired or stressed, I'm more likely to have restless legs and lost sleep and, therefore, more likely to get a migraine.

Monica Shares the Worst of Migraine

3 comments
This article represents the opinions, thoughts, and experiences of the author; none of this content has been paid for by any advertiser. The Migraine.com team does not recommend or endorse any products or treatments discussed herein. Learn more about how we maintain editorial integrity here.