The term “migraine” makes most people think of excruciating, debilitating head pain. And most migraine attacks do include severe head pain as a telltale symptom. However, some people experience migraine aura without pain. These episodes – which are still considered migraine attacks – are characterized and diagnosed by the other symptoms.

The most common migraine aura symptoms are those of visual aura although other senses, as in sensory aura, may be involved.

Migraine aura without pain, also called “Typical aura without headache”, has visual symptoms or changes in the other senses that fully go away after a short while. Typically symptoms gradually build up over five to 20 minutes – this is sometimes referred to as the “march” of symptoms – and then go away completely after about an hour. However, what sets it apart from other types of migraine with aura is that no head pain sets in within an hour of the aura symptoms. Also, no other disorder can be found to be blamed for the symptoms.

Who gets migraine aura without head pain?

Over 4500 individuals with migraine completed the 2017 Migraine In America survey. Regardless of migraine frequency (episodic to chronic), 37% of respondents reported experiencing aura during migraine attacks. 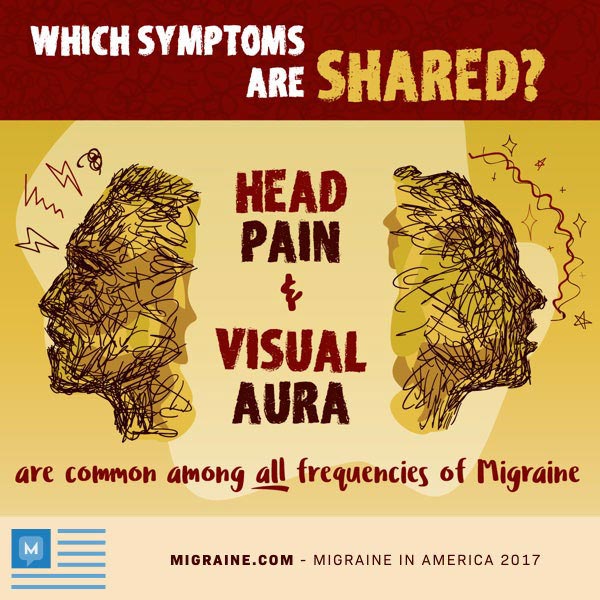 Other symptoms of migraine aura without head pain

There are some symptoms that are more common in people who have migraine aura without head pain. For example, speech disturbances, which are officially called expressive aphasia or dysarthria. These problems cause difficulty speaking, writing or pronouncing words. Another very rare symptom that occurs most often in those who do not suffer from head pain is total global amnesia. In rare cases, the migraine sufferer will act normally, however an hour or two of their memory will be gone later and they will not be able to recall the prior event. Other symptoms include vomiting, abdominal pain and vertigo.

Migraine.com advocates frequently write about their varying migraine symptoms including aura. In this video, A Peek into the Unique World of Migraine, one advocate discusses her migraine aura symptoms including blurred vision, vertigo, and aphasia. Another advocate video describes the experience of speaking “gobblygook” during a migraine attack.