Sometimes it’s not necessarily the food itself that triggers the attack, it may be an additive in the food such as food coloring that launches the migraine attack.

Specific foods may serve as triggers in some individuals, while others might suffer a migraine attack if they miss a meal. Studies show that almost half of people with migraine have attacks if they fast. The migraine typically occurs after roughly 16 hours of fasting. The reason behind this isn’t certain, but some researchers believe that without food the body produces stress hormones, which activate chemicals in the brain responsible for migraine.

Food craving as a migraine symptom

Another belief is that the food cravings are actually part of the disease which leads to eating non-typical foods, such as chocolate. In this scenario, the food itself may not be the trigger. 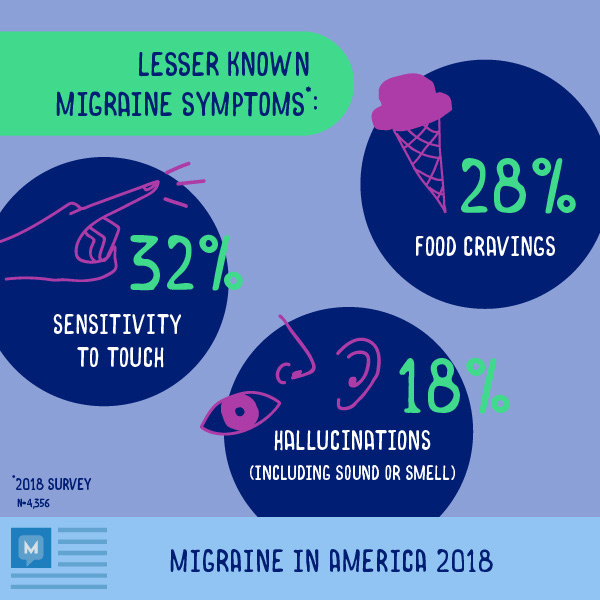 In the 2018 In America survey, 28% of 4,356 respondents reported food cravings as a migraine symptom.

Most common foods that trigger migraine

Chocolate contains several ingredients that may play a role in triggering migraine. One substance, phenylethylamine may alter blood flow in the brain or cause the release of other chemicals in the brain leading to migraine. Chocolate also contains caffeine.

Caffeine has well-known effects on the central nervous system and the blood vessels of the brain. Marketed as a stimulant that increases alertness and energy, caffeine may also induce insomnia. Withdrawal from caffeine is also known to cause head pain which can last for days.

MSG, monosodium glutamate, a food additive used to enhance flavor of foods. It is commonly found in foods from Chinese restaurants, frozen foods, canned or dried soups, processed meats, salad dressings, snacks as well as tomato or barbecue sauce. MSG, has been found to cause animal blood vessels to narrow and contract, may trigger migraine by this action in the blood vessels of the brain. It could stimulate certain receptors in the central nervous system or lead to the release of nitric oxide, which may lead to the head pain.

Cured meats such as bacon, sausage, hot dogs and ham contain nitrites to preserve color and flavor, while preventing growth of botulism. Nitrites may cause the release of nitric oxide and widening of blood vessels.

The best way to manage your food or any other migraine trigger is to take notes in your migraine journal. This journal should contain:

Your migraine journal will help you make your own migraine trigger list which may help reduce the number of migraine attacks.