In recent decades, important strides have been made in understanding the pathophysiology of migraine. However, this enterprise still remains a work in progress. During much of the twentieth century, migraine was thought to result primarily from vascular dysregulation. As part of this hypothesis, aura preceding headache was thought to result from hypoxemia related to transient vasoconstriction and migraine pain from rebound vasodilation, which caused primary nociceptive neurons within the walls of engorged intracranial vessels to undergo mechanical depolarization.

This vascular hypothesis agreed with the observed effects of vasodilating drugs, such as nitroglycerin, which caused headache, and vasoconstricting drugs, such as ergotamines, which resolved headache.1 However, results from functional neuroimaging studies conducted in the 1980s and 90s showed that decreased cortical blood flow occurring during aura was insufficient to result in ischemia (Figure 1) and that headache onset preceded vasodilation.2,3 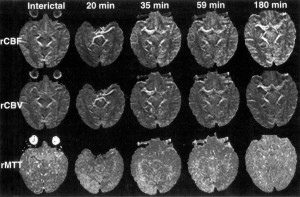 Current thinking has moved away from vascular dysregulation as a primary cause of migraine. It is now believed that vasodilation and vasoconstriction are probably epiphenomena and that neuronal dysfunction is the possible primary driver in the pathophysiology of the disorder.1,4,5 Specifically, activation of the trigeminovascular system, cortical spreading depression , and neuronal sensitization are seen as playing important roles in migraine pathophysiology.1,5

Sensory modulation can occur, via both direct and indirect projection, by descending influences such as those from the hypothalamus, midbrain periaqueductal gray (PAG), pontine locus coeruleus (LC), and nucleus raphe magnus onto the TCC. Sensory modulation also occurs from the hypothalamus, LC, and PAG by ascending influences.5

Neuronal sensitization, the process by which neurons become increasingly responsive to nociceptive and non-nociceptive stimulation, is thought to play a role in migraine attacks. Sensitization results in decreased response thresholds, increased response magnitude, expansion of receptive fields, and development of spontaneous neuronal activity. Peripheral sensitization in the primary afferent neuron and central sensitization of higher-order neurons of the spinal cord and brain have been shown to play an important role in somatic pain. It is likely that many of the symptoms of migraine, including throbbing headache pain, exacerbation of headache by physical activity, and allodynia are linked to sensitization.