I was asked to write about my binasal occlusion (BNO) glasses. However, a little background is needed.

In 1963 when I was 9 and on vacation in Minnesota with my family, I fell onto the back of my head from a 6 foot high platform while trying to climb on a rope swing hanging from the ceiling of a huge barn. As many folks my age will tell you, back then, childhood injuries had to be BIG before parents responded. Blood, bones sticking out, a car hitting you… those qualified for attention.

Since I was knocked out cold, a country doctor was called and he briefly woke me up with smelling salts. What I saw was the top half of my mom in the upper left corner and the bottom half of her in the lower right, with a big black line across the middle. (This description is important as you will see later on in my story.)

I tried to tell my mom what I saw, but nobody seemed to care what I was saying. Apparently, I was talking gibberish, but to me, it sounded like real words. All I remember was the doctor saying, “She’ll be fine. Just let her sleep it off.” I slept for 4 days.

When I woke up, I had the worst headache of my young life. I was horribly tired and couldn’t go out in the sun without throwing up. I spent the rest of our vacation laying around with my aunt’s dogs. No more horseback riding or swinging on gigantic swings hanging from the barn. The ride back to Texas was miserable for me, sweating in an un-airconditioned car and throwing up.

It was the last week of summer, so school started the following week. My fourth-grade teacher quickly realized that I couldn’t read the blackboard. Usually, I sat at the back of the class since my maiden name began with Z. Now, I could only see the board standing 2 ft away. The year before I had perfect 20/20 vision.

Little did we know at that time that landing on the back of my head had damaged my vision. In addition, I developed a hyper-sensitive sense of smell, but this was slow to be recognized. It wasn’t until my husband started working for a brain injury nonprofit organization that we realized my childhood head injury was more severe than the old country doctor realized. I had suffered an undiagnosed brain injury.

My myopic vision continued to degrade rapidly. By high school, my glasses were super thick. By the mid-1980s, my vision was 850/20. I eventually had radial keratotomy done in 1987 (which was the forerunner to Lasix).

As my vision degraded and my sense of smell increased, so did my migraines. Soon I couldn’t be around any perfumes, hairsprays, soaps, detergents, or even deodorants. “Loud” scents caused instant pain like a red hot poker stuck into my eyes. As time went on, my migraines went from 3-4 per year to 3-4 per month. When these new super-strong clothes detergents were developed and plug-ins became the rage, I began having non-stop daily migraines. I could smell the detergents from 30 feet away, instantly setting off a migraine. Even walking my dog outside was dangerous because neighbors’ dryer sheets caused havoc. That was the beginning of trying to figure out how to stretch 9 triptans to last 30 days.

Needless to say, eventually I lost my job and was forced onto long-term disability in 2015, and I began living in almost total isolation. No church. No restaurants. No trips to the grocery store, or even to the post office. Friends quit visiting, then quit calling. It was hard going from being a super social person, playing music and singing on stage, to just cleaning the house and cooking meals. But I adjusted as best I could and developed a strong positive-thinking attitude. (See Holly Harding’s interview of me: Profiles in Courage: Annie Seeks Joy and Meaning Within Pain.)

Here’s where I feel God stepped in. Through my husband’s job, he met many specialists on brain injuries. One person was Dr. Dan Bowersox of Bowersox Vision Center. Dr. Bowersox helps people with brain injury regain their vision and balance. Thanks to COVID my husband had to hold the brain injury survivors' support group meetings from our home via Zoom. I overheard the presentation by Dr. Bowersox and asked if Dr. Bowersox could help people with migraines. He said yes and I immediately made an appointment.

Dr. Bowersox spent hours with me, running tests, having me walk down a hallway wearing funny glasses. He actually recreated what my brain saw back when that old country doctor woke me up with smelling salts on the day of the fall. Dr. Bowersox said that seeing this re-creation confirmed that my head injury had affected my vision, and my brain had been struggling to correct and balance out the images that my eyes were sending to it. He felt this was a contributing factor in my migraines. In addition, he felt that many of the car accidents I had been in as an adult contributed to the old brain injury, causing more problems and increasing the frequency of migraine. He was the first doctor to acknowledge that I had received a brain injury in that fall in 1963.

Dr. Bowersox took my glasses and painted two triangles on the lens next to my nose with clear nail polish. These marks are called binasal occlusions (BNO). Within an hour, my migraine broke… in spite of the fact that nail polish fumes would have normally given me a migraine. This was just the beginning of our journey. Dr. Bowersox explained that the BNOs were interrupting the images being sent to my brain, slowing them down, and allowing the images to reach my brain at different intervals. Thus allowing my brain to process the images differently. This way my brain doesn’t have to struggle as hard to fix what my eyes are seeing.

Next, I was sent to another specialist at Gaddie Eye Center, Dr. Rob Ensley, who fitted me into scleral contacts. Scleral contacts are large contacts that rest on the white of your eyes. Due to having had RK surgery back in the 1980s, I no longer could wear normal contacts due to the scars left behind. By wearing scleral contacts, none of the contacts touch the cornea, thus allowing me to wear contacts instead of the heavy, heavy glasses like before. Although wearing scleral contacts gives me perfect distance vision and reduces the weight of my glasses, I still needed glasses so I can have the BNO marks on the lens. But now the only prescriptions in my glasses are for reading.

The end results have been astonishing! Before my BNO lens, I was having 24-28 migraines per month rating my pain levels at 6-9, with the average hitting level 7. Currently, my average is 12 days per month with the average being level 4.5, and I actually had one 30-day period with only 7 days of migraine! To me, this is an absolute miracle! They anticipate that this average will improve with more time. BNO glasses have literally given me more than half my life back.

Now, I must add a note here that my neurologist also has me on Aimovig and Botox. However, I was on those for several months with only slight improvements. I dropped 4 days using both Aimovig and Botox, which did make me happy. But by adding in the BNO lens, I have made a significant improvement.

There are a lot of articles about research on BNO glasses (see two below), but none are specifically about their impact on migraine. Most are about traumatic brain injury, cerebral palsy, and concussion. Nonetheless, I know for a FACT that these BNO lenses have changed my migraines for the better. 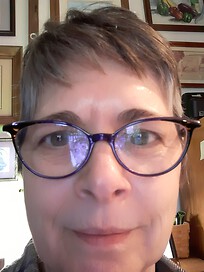 What Are Your Migraine Treatment Goals?

12 comments
This article represents the opinions, thoughts, and experiences of the author; none of this content has been paid for by any advertiser. The Migraine.com team does not recommend or endorse any products or treatments discussed herein. Learn more about how we maintain editorial integrity here.