The Editorial Team at Migraine.com is highlighting people in the migraine and headache disorder community in a series of interviews. We talked to Sarah who is living with migraine, chronic daily headache, depression, anxiety, and to top it all off, fatigue. 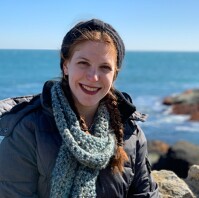 Migraines have always been so debilitating. They affect my daily life – from my social life to my work life. They’ve encroached on priceless time with my family, friends, and colleagues and have hindered my creativity and productivity. I am one of the lucky ones (detect sarcasm here) that get migraines around 15 days per month.

Triggers include rain, storms, barometric pressure dips, and heatwaves. Living on the East Coast (Boston, MA specifically), there tends to be a trigger present around half of the month.

I would describe my migraines as a really terrible headache - a dull, constant pressure in the forehead and sinus area (including the eyes and under the eyes). Sometimes, I get pain in the back of the head as well, including the neck. Symptoms also include lightheadedness and nausea.

Of course, I don’t just deal with migraines. I deal with depression, anxiety, and fatigue that are correlated with migraines. Long ago, I validated my sad feelings by asking, “How could I feel joy if I’m dealing with a Level 7 pain in my forehead almost every day?” Fatigue is almost as equally debilitating as migraines for me. From the fatigue in my limbs to generalized fatigue, it forces me to take a nap almost every day to reenergize. Naps and sleep feel very nice because it’s one of the only times I don’t have head pain (as I also have chronic daily headache). The fatigue and the pressure in my head make a cocktail I wouldn’t recommend to anyone.

I'll try anything to reduce symptoms

I have yet to try any medications that reduce or remove my daily headaches or migraines. My migraines didn’t falter after trigger point injections or nerve block injections, so I’m now a candidate for Botox injections. After 14 years of migraines, I’ll try anything that could reduce migraine symptoms.

My attacks from start to finish

Most of my migraine attacks start right when I wake up. I immediately notice the severe pain in my forehead region and know that the day won’t be easy. Getting out of bed is the first hurdle after waking up tired while still getting 8 hours of sleep. I’ll push through work and other activities I’ve signed up for as not to let my migraines take over my life. I’ll try to act “normal,” like I’m not suffering internally. When I get home, I’ll put my headwrap with an ice pack on my head and lay down, finally able to rest a little bit while trying to numb the pain away. Nothing will take the pain away until a full night of sleep with no trigger the next day.

We have a long way to go to eliminate migraine stigma

I have enjoyed seeing a reduction in the stigma around migraines, but we have a long way to go. I look forward to a day where people don’t try to minimize migraines by saying, “it’s just a headache” or question the severity of the pain. I wish for people to start understanding how debilitating migraines are so they can feel sympathy or empathy towards us as we try our best to cope.

Sometimes when I’m having a bad migraine day, I get incredibly sad and think, “Why me?” or “Why will this pain never end?” My advice to other people diagnosed with migraine is to remember that you aren’t alone. There are millions of us out there struggling, usually silently, right alongside you. If you need to vent about the pain or the symptoms, I hope you can find a network of caring individuals in your area, and if not, look for a migraine support group online. We have to remember this isn’t our fault, the pain is real, and we need to go out and fight for the best care.

Monica Shares the Worst of Migraine

51 comments
This article represents the opinions, thoughts, and experiences of the author; none of this content has been paid for by any advertiser. The Migraine.com team does not recommend or endorse any products or treatments discussed herein. Learn more about how we maintain editorial integrity here.